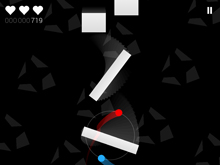 I don’t get frustrated easily. For me to lose my cool, it takes a long series of failures. If I mess up a job interview, I’m calm, but if I fail at the exact same menial task literally dozens of times in a row, I understand how some people will chainsaw a stranger’s car in half.

“Duet” is an app designed for frustration. It will have people grinding their teeth until they spit powder. It is more discouraging than trying to walk a tightrope on ice skates.

“Duet” is an extremely simple and minimalistic game. Two balls, one red and one blue, sit at the bottom of the screen waiting for the player to rotate them right and left to dodge the obstacles flying at them from the top of the screen.

It seems easy enough at first, but when one ball moves left, the other moves right. The player has to watch the flying obstacles, move one ball out of the way, and make sure the obstacle doesn’t hit the other ball afterward.

It is not easy. The entire game is counterintuitive, and after playing through several levels, the obstacles become ridiculous. Some of them will split in half when they approach the balls, some of them will rotate, and some of them are actually false decoys that will trick you into smashing a ball into another real obstacle.

Oh, and the smashing is wonderful. If a ball hits an obstacle, it will splat against it and the level starts over. However, when the player performs the level again, all the splatters from the previous failures are still on the same shapes.

The splatters are probably the worst part of the game. I could literally twist and dodge my way through a crazy level with my heart racing, see the final obstacle coming up, and notice a red splatter on the right corner of it from where I died last time.

And I got to watch myself make the exact same mistake as I did before, with the exact same timing, coating the old red paint with some fresh red paint. This happened constantly.

“Duet” reminds us all of the futility of life, the way history repeats itself, and the fact that even when a person succeeds, another series of failure is right around the bend.

That all being said, it is more fun than “Tetris” and more addictive than meth. “Duet: There Is No God.”