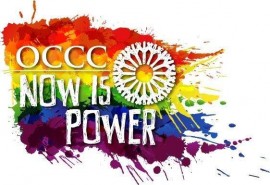 For the first time since the college opened its doors in 1974, Oklahoma City Community College has formally announced its support for the gay, lesbian, and transgendered community and will be representing OCCC gay pride by providing a float in the upcoming Oklahoma City Pride parade this weekend.

The parade starts at 6 p.m. Sunday, June 26, in the southbound lane of N. Classen between NW 46th and NW 39th Streets. Staff, faculty and participants will walk and join the float in celebration of Oklahoma pride.

Pride festivities start this Friday evening on the 39th Street strip between N. Young Boulevard and N. Pennsylvania Avenue and concludes with the parade Sunday. Admission to the event is free.

The float marks the beginning of an OCCC Diversity initiative that will be set in motion in the following months, college director of equal opportunity Regina Switzer, Ph.D, said.

Dana Coulton, committee member and coordinator of professional development said volunteers are encouraged to sign up through the the college’s official event page to get news and updates regarding the event. The event can be accessed at: http://calendar.activedatax.com/occc/EventList.aspx?view=EventDetails&eventidn=12862&information_id=30518&type=&syndicate=syndicate

Switzer is charged with ensuring the college supports equity and fairness. She said the college wants to take inclusion focus a step further and formally present a platform that promotes diversity of all kinds for students, staff, and faculty.

“The college is really trying to put effort and initiative resources into our diversity program. You’ll be seeing a lot in the upcoming months about diversity,” Switzer said.

“Aislinn Burrows in the President’s Office was the first to suggest the parade, and the committee fully supported the idea,” she said.

According to Switzer, the float was an idea backed by members of the Diversity Working Group who volunteered to help plan and implement an event during Pride month with the intention of kick starting the OCCC Diversity campaign.

“We had this subgroup come together look for some one project that we could do in a short timeframe to kind of get the message out there for the month of June because it’s Pride month.”

“Everyone seemed to like the idea. We sort of ran it up the flagpole to make sure we had the approval of the administration, and I’m happy to say that we did,” she said.

College President Jerry Steward in an emailed comment said inclusiveness was paramount to the college meeting its mission.

“OCCC is an open access institution. Being a diverse and inclusive campus is a critical success factor for improving educational outcomes,” he said.

“Participation in this weekend’s OKC Pride Festival parade is an individual decision and those who have an interest in joining OCCC’s parade entry are encouraged to participate.”

The college’s entry into the Pride parade lineup came over a month before the recent and deadliest mass shooting in United States history, taking the lives of 49 people at Pulse Nightclub, a Florida gay dance club.

Switzer said the float joins in with much of the country in showing solidarity with the victims and their families.

“It’s not a time to pull back in fear. I think if you’ve watched the news you’ve seen sort of a swelling around the country of support, and we want to be part of that,” Switzer said.

Lt. Christopher Tipton of the OCCC Police said that there will be representation of the department present at the parade.

In an official statement, the OKC Pride organization announced that due to these recent events and their continued concern for the safety of their attendees they will be tightening security at the event.

“I support it. Everybody is equal, so they can do whatever they want,” Radiation therapy student Phuong Nguyen said.

Tran Le, dental hygiene student, said she was also in support of the college’s role in the parade and of transgendered students.

Not everyone is happy that the college will be driving a float in the two-hour parade with the college’s logo adorning it. Switzer said she knew that some of the campus community feel very strongly that being in the parade is wrong, and the college has to respect that.

Switzer said, “At the same time we have obligations, and it’s important that we create an atmosphere where hate isn’t permitted, where violence isn’t permitted and where people feel valued.”

She said hopefully people who oppose the college’s participation will shift just a little bit, to accepting and understanding.

“We have a lot of people here at OCCC that are members or supporters of this community, and I think many of us feel very strongly that our students need to feel accepted, need to feel understood and we need to communicate the message that everybody belongs here,” Switzer said.