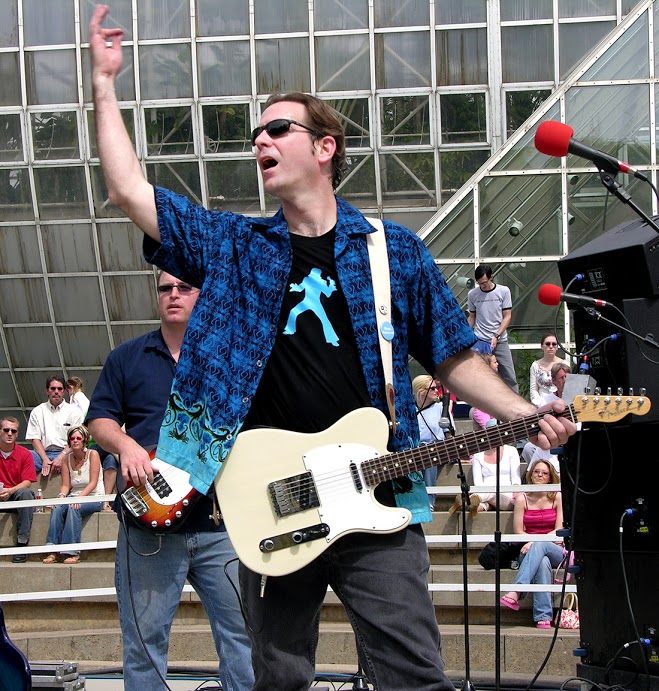 Music is part of our everyday lives in some form or another but few get to experience it the way Randy Cassimus does.

By day he is OCCC’s Alumni Relations and Community Development Coordinator, a position he has held since last fall. Whenever opportunity presents itself, Cassimus becomes a Hi-Def Howler.

Founded in 1998 by Cassimus and two others, the Hi-Def Howlers are a four-piece cover band that performs at various locations and events around the state. Cassimus, guitarist and vocalist for the band, said he has been playing guitar for 30 years.

“I learned to play about the time I was graduating high school,” Cassimus said.

“I played in a couple of bands when I was in college in Florida.”

Cassimus formed the Hi-Def Howlers 15 years ago when he and a couple of co-workers decided they wanted an outlet for their musical abilities.

“All of us worked in the television business at News Channel 9,” Cassimus said. “We were all musicians and just looking for something to do.”

Cassimus said the band had a unique approach when coming up with a name.

“It’s kind of an unusual name,” he said. “We decided we wanted to have a name with something that had to do with television because we were all in the business and ‘hi-def’ is what is referred to as ‘HD’ these days,” he said.

“It also had to have something to do with monkeys — don’t ask why,” Cassimus said with a laugh. “So we came up with howlers for howler monkeys.”

Despite membership changes over the years, Cassimus said the lineup has remained the same for the last eight years.

“We all have day jobs, we all have day gigs,” Cassimus said. “We’re not all thinking we’re going to go out and make it somewhere; we just really enjoy performing and sharing good music with our friends.

Although the band’s speciality is covers, Cassimus said there is a unique quality to their band you will not find elsewhere.

“What makes us a little bit different than a lot of the bands out there is just the really wide variety of stuff we play. We cover seven decades worth of stuff,” Cassimus said.

“We play everything from 1950s Chuck Berry and Johnny Rivers through ’60s and ’70s classic rock, a lot of ’80s — what used to be known at the time as college rock: REM, Tom Petty, Elvis Costello — a lot of ’90s: Weezer, Green Day, all the way up to stuff that’s out right now. It’s very multi-generational.

“If we’re playing something you don’t like, hang around a couple of songs and there will probably be something that you do.”

“We are three-time Oklahoma Gazette Woody Award winners,” he said. “We won their readers’ poll in both 2003 and 2004 as Favorite Local Band and we won in 2011 as Best Cover Band.

Cassimus said the band currently performs about one gig a month. “Our most recent gig we played for 1,500 people at the Devon Summer Twilight concert series out on the lawn a couple weeks ago,” Cassimus said. “We enjoy playing wherever. It doesn’t matter if it’s 1,500 people or 15 — we enjoy playing for whoever is there to listen.”

Cassimus also performs as a solo artist acoustically outside of the Hi-Def Howlers.

“I’m a music guy. I always have been,” Cassimus said. “Being able to play, being able to perform and watching people out there enjoying it, that’s the thing I enjoy the most.”

Cassimus cites Tom Petty, Bruce Springsteen, Neil Young, Bob Dylan, and the Beatles as some of his musical influences.

“Those were who I listened to as a kid,” Cassimus said. “I like Neil Young because I love how he has always been able to be both an incredible folkie singer-songwriter and an incredible blistering rocker.”

Cassimus gives this advice to those wishing to pursue performing:

“Take lessons and get proficient in whatever you’re trying to do,” he said. “Have fun and don’t be afraid.”

Fifteen years strong, the Hi-Def Howlers have no intention of slowing down anytime soon.

“I love [the band] like brothers and we have fun together. We’ve been doing it for a long time,” Cassimus said.

“I think the fun we have on stage translates to the audience.

“If we’re having fun, they’ll have fun and that’s how we like to approach it, regardless of how many people might be out there.”