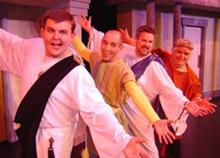 Comedy erupted on the stage of the Bruce Owen Theater in April as the OCCC players presented “A Funny Thing Happened on the Way to the Forum.”

Taylor Reich started off the evening by belting out the opening Stephen Sondheim tune, setting the mood for an evening of laughter.

As Pseudolus — a Roman slave with a flair for manipulating everyone including his master Hero — Reich took full command of the audience. With his delightful facial expressions and outstanding comedic banter he drew viewers into a happy mode and kept them in the palm of his hand throughout the play. This does not seem an easy task since this musical comedy is full of twists and turns.

Scott Whitehead as Hero has fallen in love with possibly the only virgin in town Philia after seeing her through the window of the neighboring house, which happens to be a house of ill repute, full of entertaining courtesans and one very funny eunuch played by Sebastian Rojas.

The virgin has been sold to Miles Gloriosus by the town purveyor of women Marcus Lycus.

To make the situation seem even more impossible, Hero’s parents, Senix and Domina have forbidden their son to associate with the neighbors and put Pseudolus in charge of being sure Hero abides by their wishes. Psuedolus thinks he can earn his freedom by concocting a plot to get Hero together with Philia, and the insanity ensues.

Whitehead had the best singing voice in the play. He also is a natural talent or truly a kind and innocent young man to have been believable as the gullible Hero.

A bit more emotion from Candice Parker as Philia, would not have been out of character. Rather than an innocent girl in love with one man and being sold to another, it appeared she would be content with whomever she was with at the moment. Philia’s commitment to her contract is understood, but did she love Hero or was she looking for a way out of slavery? It was not clear by the performance.

On the other hand, Caulen Shannon as Hysterium looked as though he might hyperventilate when he was put in a dress and wig, and had to pretend to be dead, then threatened with a funeral pyre, and was chased through the audience by a man who thought Hysterium was the virgin. That might make a man shake. It certainly provoked laughter.

Speaking of provoking laughs; Nicholas McDaniel as old Erronius on a fool’s errand, elicited instant giggles each time he ran across the stage, counting his laps around the town.

Chris Davis, Blake Gonzalez and the Proteans made their singing laughable. Sarah Fitsimmons and Gabriel Pranter seemed to take their voices more seriously, losing some of the comedic overtone.

An actor once said he didn’t try out for a musical because he couldn’t sing, to which a very smart professor answered, “If you are an actor then act like you can sing, and make the audience believe it.”

Musical comedy is not easy to perform, but the cast of “A Funny Thing Happened … ” was filled with fine actors. Director Brent Noel and Musical Director Michael Boyle can be proud of their efforts with this production.