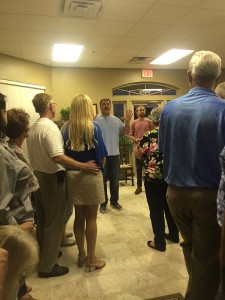 Edmond state Senate candidate Paul Blair failed in his bid to take the GOP nomination from Adam Pugh Tuesday evening. Blair conceded in a speech to his supporters at his watch party.

“I promised my wife that if we don’t win this time then we’re not running for office,” Blair said, “It’s a very straining process.”

“I scare the establishment,” Blair said, “We don’t just talk our faith, we live it.”

Though controversial, voting was sparse in Tuesday’s election.

A total of only 17 people voted in the Oklahoma City Community College precinct, Tuesday evening.

Voters were casting their ballots in the Oklahoma Primary Runoff election

Compared to the last election, OCCC precinct officials said no one voted at the college’s precinct.

As of 9:18 p.m., Democratic candidate AL McAffrey lead Tom Guild in the contest for the Democratic nomination for the state’s 5th Congressional District. Election Board results showed

McAffrey said his campaign was run for voters and not for himself.

“I think the motivation for anyone, whether you get into politics should be the people,” he said, “You know right now we have a lot of issues here in Oklahoma and as I’ve traveled the whole CD five we have a lot of issues, and my thoughts are that this is something we have to have a congressman that you can talk to.”

Earlier at 8:22 p.m., Guild held a lead against McAffrey.

Guild said, “I am obviously pleased with the results and I am hoping that the lead continues to hold.” At 8:22 p.m., United States Congressional Democratic candidate for district five, Tom Guild began to lead his opponent Al McAffrey.

Guild said, “I am obviously pleased with the results and I am hoping that the lead continues to hold.”

McAffrey sat down with the Pioneer to answer questions looking forward on election results.“I’m excited all night long, I mean not a big lead but we’re ahead in the votes. I’m excited for the simple reason that we have a chance to iwn this to represent the people of the fifth district.”

McAffrey said he has been involved in politics in Oklahoma for years.

“I ran for the house of representatives in two-thousand five, was elected two-thousand six. I was elected by a fifty two percent of the vote, which was not a big amount. I’ve been in the house and the senate for a total of eight years.”

Elsewhere in Oklahoma County, voter turnout was light.  Oklahoma City School Teacher Judy (she did not want to disclose last name) voted at the India Shrine Center on NW 36 street with her daughter. .

“I usually come with a posse,” Judy said. “But people got busy today so I came alone.”

Judy said she voted for Linda Dodson who is running for Court Clerk and for David Hooten for County Clerk.

“I know them personally and I think they’re very qualified for what they’re running for,” she said.

Judy said her personal connection made the decision easy. “I know they’re people of integrity,” she said.

She met Dodson through a music sorority they both attended.

In the state’s Fifth Congressional District, supporters of Democratic Candidate Al McAffrey hosted a watch party tonight at the Chi Gallery. First time voter Trevour Cruz said he supported McAffrey because he felt it was important to him to make his voice heard.

“I was told voting is not a privilege and the whole thing,” he said.  “I never took it to heart until I started talking to people.”

Cruz said he understood that he had to find out what the candidates stood for and make an effort to make the choice he thought was right. “I went on YouTube and all parts of the Internet to see what the Democratic candidates had to say. I thought McAffrey seemed real honest.” he said.

He said he identifies with the Democratic party and will most likely vote for Hillary in the fall.

As Paul Blair supporters viewed the first incoming results at the watch party earlier in the night, Blair said he had no prediction for which way the vote might go.

“I have absolutely no idea about how the results will go tonight,” Blair said, “If we’re successful, wonderful. If not, it’s not like I need the job.”

By 8:45 p.m. the returns showed Blair far enough behind that he made his concession speech.

Blair was smiling after his speech.