Auditions for upcoming performances open to all 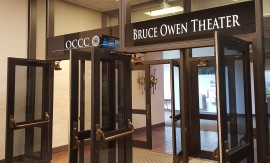 Oklahoma City Community College students interested in testing or showcasing their acting chops will have two opportunities this semester.

OCCC and the University of Science and Arts of Oklahoma will partner to produce “Cyrano de Bergerac.”

The production will open in a two weekend run. First, at USAO November 10-12 and then at OCCC the following weekend. Auditions for both productions will be held on August 22 in the Bruce Owen Theater at 7 p.m. and on August 25 at USAO in Chickasha.

“The Cop in the Head” will premiere at OCCC October 6-8.

OCCC Theatre Program Director Brent F. Noel has been with the college’s theater program for more than ten years and has experience directing a variety of productions such as “The Rocky Horror Show” and “A Midsummer Night’s Dream.”

The University of Science and Arts of Oklahoma is a four year liberal arts college in Chickasha.

USAO Associate Professor of Theatre Arts Katie Davis said their theatre department provides a degree plan for transfer students, that helps them plan long-range goals and how to meet them.

The partnership stemmed from a mutual desire to create a clear path for OCCC students to continue their education at USAO.

“We hatched a plan to have a ‘first ever’ joint production between a two-year and four-year school, where a cast for a show would be created by joint audition. We love the idea of having students visit rehearsal and performance spaces on both campuses,” she said.

“Those who come to audition should be prepared for general orientation (information about rehearsals, expectations, production plans), an introduction to characters and story from the director’s perspective, and will get to read and improvise scenes to demonstrate vocal, physical, and acting skill,” Davis said.

Flyers posted around campus state that students of any background can audition and get a chance to participate in either show.

Noel said “There are going to be roles for a wide variety of people. We have a color-blind casting policy, which means that we’ll cast regardless of race and might even be gender-blind or gender neutral casting as well so we cast the best actors.”

Dean of Arts Ruth Charnay said she encourages people from all walks of life to give theatre a try.

“There are so many things students can do. Theatre people are usually a very open, giving, and inviting kind of people, so if you don’t have a crowd then maybe you can find a place for yourself in the theatre program,” she said.

“It’s about a guy with a very large nose, in love with this beautiful woman, but he feels that he’s too ugly to really deserve her,” he said.

This beautiful woman ends up falling in love with Cyrano’s close friend Christian, a handsome well traited man. Cyrano tells his friend what to say to romance her, it’s “kind of a case of mistaken identity,” Noel said.

“The Cop in the Head” is a little more of an improvisational piece, Noel said. “It’s an audience participation kind of deal where it explores internalized oppression.” He said more details will be revealed as the dates get closer.

“The Cop in the Head” is an offshoot of Theatre of the Oppressed said Noel. It was developed by a Brazilian named Augusto Boal who worked in the ‘60s and ‘70s all over South America.

Noel said Augusto Boal came up with the idea that theatre should not be the domain of just the people who can do theatre. “Audiences should have access to it too,” he said.

Boal created this style of improvisational theatre where people from the audience get to participate in interpreting what their concept of oppression might be.

Noel said “The Cop in the Head” is more of a psychological piece.

“Why do we feel guilty if we don’t go to church? Why do we get nervous when there’s a cop following us? How does it influence our behavior?” he said.

It’s our natural responses that do the actual oppressing. It’s the concept of how society controls us without our knowing that they’re controlling us, Noel explained.

“It kind of shows how theatre techniques can be used to apply in real life situations so it takes it out of the realm of theatre.”

For more information contact Brent Noel at bnoel@occc.edu and find out if you have what it takes to help your friend romance the love of your life, or deal with the mental breakdown of oppression in our society.