Are We All Outsiders?

This past week was the end for Banned Book Month.

I’ve read through the lists trying to narrow down my favorite. Harry Potter, The Bluest Eye, Their Eyes Were Watching God.

But one has stuck with me through the years.

At the peak of 8th grade, we were introduced to a book that would apparently ‘change our lives.’ It was a book with action and adventure that ended with a realistic outcome.

Mrs. Slatten, our teacher at the time, said we needed to ‘buck up and deal with it’ for those of us who moaned and groaned. Most of the class rolled their eyes, myself included. We were expecting another dry read to get through.

Then Mrs. Slatten pulled out The Outsiders by S.E. Hinton. She gave us the gist of what the book was about, hoping to spark an interest for the boys in the class. 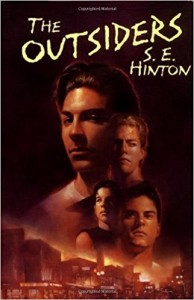 Most raised their heads, when she mentioned gangs, Greasers and pocket knives, and then —  she began.

Oklahoma based, set in Tulsa, the book focuses on two rival groups, called the Greasers, and Socs. They are split by economic status, but both face the same social changes progressing through the 60’s. With memorable characters such as Ponyboy Curtis, Dally and Johnny the book struck a chord with me. It spoke of what we’ve faced as a state, and a country, through the years.

Back then, smoking, underage drinking, and an introduction to drugs were a common occurrence — and to be honest, it still is. This is why it landed a spot on the banned book list, to prevent future influence.

Banning books like these from public schools doesn’t keep the book hidden from the public eye, or away from what we’re so scared of as a society.

At this point, it’s common for kids to experience these things.

A book won’t be the first to show them that.

If anything, film has more of an influence now more than ever.

In the book, I remember Ponyboy and Johnny rescuing kids from a burning building, while the Socs and Greasers were getting ready for a rumble. Dally takes it upon himself to “do it, for Johnny”  when the rumble was starting.

For a better tomorrow, for someone we love, to stop racism, sexists, rape, assault, you name it.

In a way, history is repeating itself.

Books like these – there’s a bigger meaning that’s being avoided when it’s being placed on the banned list. In a one sided light you could say it’s telling me to smoke, and drink, and make me want to make poor choices.

But it also leaves you with wanting to fight for what you believe in, not just physically, mind you. A lot of people, like Johnny, are dying for a cause. Some don’t have a choice in that  anymore.

In Las Vegas, Virginia, even Houston, Puerto Rico, and Mexico City they are all out there fighting their own personal battles right now.

At this point we’re all fighting the good fight for a better world, and it’s difficult. We don’t have an idealistic leader telling us how to fix it. So, we’re at a stand still.

Some of us are making the effort to fix it ourselves.

Thousands of volunteers donating blood, helping the injured and fixing all the damage; all selfless, self-made choices.

I’m not saying books are what’s going to save us, but they’re a good reminder to look inside yourself when you close it and reflect on who you really want to be at the end of the day.

That man in Las Vegas made a choice to be that person.

The group in Charlottesville, they made a choice.

When you read a book, banned or not, remember that feeling.

The Outsiders reminded me that we’re all kind of our own outsiders, especially now — we’re the outsiders looking in.

What book sticks with you during these times?