A white rapper that time forgot 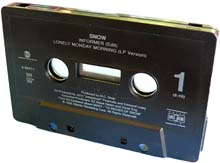 Everything old is new again. Pop music melodies are like flashbacks from my pre-teen years at the roller rink. Young people are exploring the roots of these saccharine beats that make their butts shake.

So, young people, let me tell you, there was a time before this onset of nostalgia. Not everything from the ’80s and ’90s is actually cool. For every Whitney Houston and Paula Abdul dance hit that trickled through the cracks and morphed into a Meghan Trainor or Ariana Grande jam, there are a thousand 3rd Bass, Snap or Technotronic songs that were left behind to fade into obscurity.

When Caucasian hip-hop  artists began to emerge, it was so rare that they were novelties as rich as astronaut ice cream. Before Macklemore, Riff Raff and Iggy Azalea and even before Eminem, there were others. Some you know, like the Beastie Boys or Vanilla Ice.

But there’s one white rapper that time forgot.

He came to us when we needed him most. We’d watched too much Cops and Boyz N’ the Hood. The white rappers we had were suddenly too punk or too often in Ninja Turtle movies to suit our aggressive tastes. It was 1992 and suburbanites were eager to feel oppressed by an overbearing police state. But you better believe they desperately wanted to dance too.

Then came the sound; sirens and horns — and then a voice,

“I’m sick and tired of 5-0 running up on the block. Yo Snow, they came around here looking for you the other day.”

Then came the coolest three minutes of words we’d ever heard and we could barely understand a single one. What we knew though is that we had just been loved like a tornado by this amazing artist who called himself “Snow.” We loved him back, immensely, for like eight months and then we forgot all about him.

When I want to dance though, while still making it perfectly clear that I am tough, I blare Snow’s “Informer.”

And if you listen close, you can hear a whole generation sing along, “Informer! Ya’ know da stiga stuggety bookah blam! An’ licky boom-boom down.”

These lyrics have earned their grade.