A day of remembrance: Anniversary of the Oklahoma City bombing 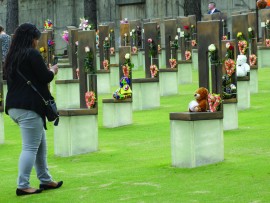 On a clear and sunny Oklahoma morning 22 years ago, a picturesque scene was shattered when a massive truck bomb exploded on the street outside of the Alfred P. Murrah federal building.

That day, Oklahoma would see the darkest that humanity had to offer.

This heinous act, perpetrated by Timothy McVeigh claimed the lives of 168 men and women, including 19 children. It injured more than 680 others. The blast destroyed or damaged 324 buildings in the downtown Oklahoma City area.

The events of April 19th, 1995 would go down as the largest act of domestic terrorism in American history.

But in response, the world bore witness to what has been coined the Oklahoma standard. Within moments, citizens  and first responders began pouring in to aid in rescue efforts.

Within hours, an overflow of donations, supplies, and money flooded the site.

Paula Sophia Schonauer was an officer for the Oklahoma City Police. When the bomb exploded, she was at home in bed after working the late shift. Schonauer was confused by an unusual rumbling sound, shortly after, she received the call to report for duty.

A veteran of the Gulf War, she said she could only compare the scene in downtown OKC to a war zone. Despite the horrors she saw, she speaks mostly of an overwhelming deluge of assistance that came in,

“There were so many responders we actually had to turn people away. One guy showed up with all these pizza boxes. I asked him if he needed an invoice. He said ‘heck no!’. This is where I think the Oklahoma standard comes from,” Schonauer said.

“Of the hundreds of  buildings damaged, not one was looted.” he said, “Just think about that.”

Former Pioneer Lab director Ronna Austin was in her last semester as a journalism student at OCCC when the bombing took place.

“It was walking into the building and I heard what I thought was  distant thunder. It was really odd to me because it was really clear outside. There were no clouds in the sky or inclement weather. It was kind of confusing,” she said.

As the TV reports came in, Austin said, students and staff gathered around to watch the story unfold. Initially, reports said there’d been a possible natural gas explosion. It was not until later that it became apparent that a bomb had gone off. She said that’s when the national media came to Oklahoma.

“That night I got a call from Sue Hinton who was the newspaper advisor at the time. She said that CNN had called the college and they were looking for journalism students to come and work with them,” Austin said.

She worked nights for CNN for almost a year as they covered the bombing. She said first responders were offered counseling for early on. It took time before people began to realize journalists on the ground might have needed the same help.

Among the journalists was Journal Record Managing Editor David Page. He said he was working in the Journal Record office across the street from the Murrah building when the bomb went off.

“I had just gotten up and left my desk to get a cup of coffee. I was walking back across the newsroom when there was this explosion,” Page said, “I walked out to the street and saw all this glass everywhere.”

Page suffered lacerations and blood loss from the impact of flying glass, he survived that day but others did not.

Oklahoma City Community College student in 1995 Kimberly K. Clark, 39  was among the 168 people who died that day. Clark was a petty officer first class in the U.S. Naval Reserve and legal assistant for the Urban and Housing development office. Her wedding date was weeks away.

A scholarship fund was set up in her honor through the Oklahoma City Community Foundation.

On Wednesday, April 19, 2017, survivors and family members came together to place wreaths on each of the symbolic chairs at the memorial grounds where the Murrah building once stood. Each empty chair represents a life lost in the explosion.