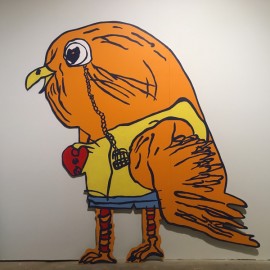 “The Stream of Stories” by Samuel Shaw (Age 9)

Once upon a time there was a story that I was supposed to tell, but I had forgotten. I had to work very hard at remembering.

So I dove into the stream of stories and found it on a purple colored current. The current took me to a far away place sometime ago. I found an opening and set up camp, made a fire and went to bed.

In the morning I was awoken by five birds, one of them paled in comparison to the others.

The birds were talking about a time before creation. Which the not so colorful bird seemed to know a lot about.

They all listened intently as the not so colorful bird took one wing and cut open a sliver in time and space itself.

He told them to look in so they all stuck their heads inside. One of them came out and said, but it’s just a void why would you show us this?

The not so colorful bird said look again and you will see something. They all looked back in and saw a glimpse of something shiny and polished in the distance.

It got bigger and bigger and started to look like a key. All of the birds ducked as it flew out. The not so colorful bird caught it with his wing and closed the sliver.

He said this is the key that unlocks the gift inside of everything or everyone. Some people know about it some people do not. We are about to talk about someone who does.

Remember the stories you imagined as a kid? Whisking yourself away to faraway lands, hanging out with your favorite characters and daydreaming to your heart’s content?

Local artist Erin Shaw brings the adventure her son Samuel wrote to life with a new visual tale that can be explored and experienced.

“The Stream of Stories” is hosted by Current Studio on 1218 N. Penn and is open to the public on regular exhibit hours Wednesday – Sunday from noon to 6 p.m. and Thursdays from noon to 9 p.m.

Artist Erin Shaw said she was very pleased with her work and was taking a step back to remember how the project started to finally seeing the big picture.

“It’s different than any show that I normally do because it was so collaborative. I love watching people come in and look at their reactions as they’re experiencing it as well,” she said.

Shaw said she gives much love and credit to her son Samuel, who wrote the mysterious and surreal story.

“Without a doubt he’s influenced me probably as much as any person out there.”

The journey began on a simple snow day.

Samuel was drawing with his mother. Shaw then noticed something she never considered and acted on it. “He looked at his drawing and looked at my drawing, then put a big ‘X’ through his,” Shaw said. “He didn’t think it was good enough, and so that kind of started this ‘I wonder how I can help protect that part of his creativity?’”

Shaw said she never saw him experience self-criticism before, and it was heartbreaking.

She found a way to preserve Samuel’s art and it blossomed into a series of collaborations.

“That’s kind of how it started,” Shaw said, “I took photographs and made paintings out of them. It very organically evolved into ‘Let’s do another project, what should we do?’. This is definitely the most amazing collaboration that we’ve done so far.”

Co-Founder of Current Studio Kelsey Karper said the exhibit walks people through the story and explained how the exhibit is a demonstration of what an artist can do with some time and support.

“Erin did all of this on site, so she was working in the space the entire month of August,” Karper said, “We provided her financial and logistical support and it helped her make it all possible.”

The inspiration Shaw had not only came from her child, but also other children with their own visions of the characters – but the children who contributed did not know what the story was about.

“Shaw put out a call to kids throughout OKC to submit drawings of the characters in this story,” Karper said, “So rather than giving them the story, she gave them a list of all the things she needed drawings of; clouds, trees, birds in clothes, campfires, tents. We gathered all these drawings from kids.”

The event themed was around children’s’ drawings and Samuel’s vision, so Shaw took elements of those drawings, blew them up to larger than life and hand painted them to create this environment that illustrates Samuel’s story.

Shaw said picking the right drawings out of the lot was easy, and made sense to her.

“It seemed pretty obvious to me as I was looking at all of them. The setting was actually in a cave and I wanted to have cave drawings on the wall so we were able to incorporate a lot more drawings because of that,” Shaw said.

Current Studio holds regular “Current Thursdays” that serve as an open house to the public.

“The Stream of Stories” exhibit will have its closing day on October 13, so hurry up and dream.