‘Zombies!’ is a crawler, not a runner 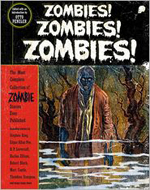 There is a sad and painful realization that must be made regarding one of my favorite icons of the horror genre. A statement (inducing a pain in me so great that it creates a want to strike myself in anger at its mere mention) that has become truer now than ever before: Zombies… have become cliché…

In the last five to 10 years, the American pop-culture identity has become inundated with every manner of zombie-related paraphernalia; bridging the entire spectrum from mind-blowingly great: Max Brook’s literary masterpieces “World War Z” and “The Zombie Survival Guide,” as well as Robert Kirkman’s graphic novel “The Walking Dead.” There is also the disastrously terrible: Ving Rhames and Nick Cannon’s cinematic lobotomy that is the 2008 remake of “Day of the Dead.”

This market saturation has caused the creative and sociological potential of the zombie genre to become diluted and plots have become so mundane that George A. Romero himself has succumbed to releasing half-assed tripe (See: 2009’s “Survival of the Dead”).

Joining the fray is Vintage Publishing’s compendium of zombie stories oh so creatively titled “Zombies! Zombies! Zombies!” The collection of stories contains notable submissions from authors including: H.P. Lovecraft, Edgar Allan, Poe, Theodore Sturgeon, Stephen King and Harlan Ellison, while the majority of the works are no more necessary than a rotting, dangling appendage.

Otto Penzler, the collection’s editor who’s also released similar tomes dedicated to vampires, lizards and adventure stories, most likely stumbled upon the rights to these stories through happenstance and shelled out the necessary finances to secure stories with star power that would draw the reader in.

H.P. Lovecraft’s “The Outsider” and Poe’s “The Facts in the Case of M. Valdemar” are the standouts from a literary perspective but my personal favorite is Harlan Ellison’s unique and adeptly written “The Song the Zombie Sang,” the tale of a concert pianist who, years after his death, is artificially resuscitated night after night to perform classical compositions that have lost all meaning to him and all he has left is the wish to finally “slip into the ether.”

“Zombies! Zombies! Zombies!” is a good read for anyone who aims to broaden their catalog of zombie literature and if you have a spare hour or two, hit the book store. I wouldn’t recommend purchasing the book though ($25 is a big ask for the quality). The undead are rapidly losing their luster and this book is doing little to stifle the onslaught of the mediocrity of pop-culture.