Why review a book when you have chips? 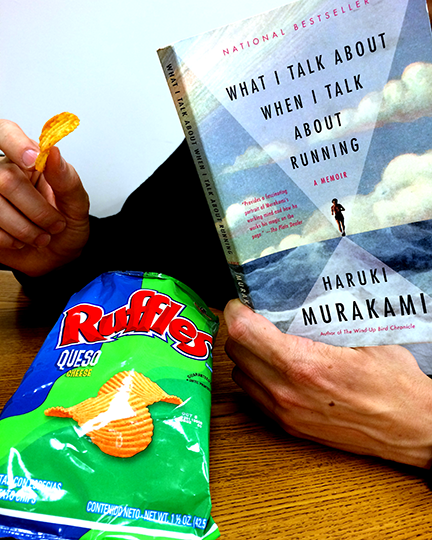 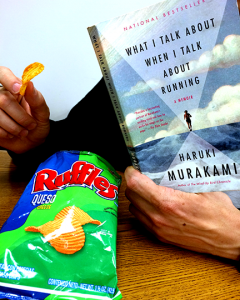 This week I planned to write a review of Haruki Murakami’s memoir “What I Talk About When I Talk About Running.”

Then I opened this bag of chips, and thought to heck with it.

Nobody reads books anymore. People are probably more interested in these Queso Cheese Ruffles than a book about a writer testing his mental and physical limits.

Haruki Murakami might be the greatest living Japanese novelist, and possibly one of the best in the world, but I know readers would much rather learn about the delicious zing of these spicy chips.

Those familiar with his works may compare them to the claustrophobic fiction of Franz Kafka.

They may recognize his love of hardboiled crime fiction, but there is nothing boiled about Queso Cheese Ruffles. They are deep fried.

His years working at a jazz club may bring musical rhythms and colorful atmosphere to his writing, but these chips make a musical crunch in your mouth.

They also have a bright orange color that is probably not from actual cheese.

The stories in Murakami’s memoir may teach lessons about handling the challenges of a long race or a writing career.

They might provide insight to help cope with the ups and downs of life, but Ruffles have ridges that go up and down, and up and down.

Murakami’s sometimes reflective tone may evoke feelings of melancholy and nostalgia, but the smell of these chips makes me nostalgic for the time I ate some movie theater nachos with gooey nacho cheese sauce.

This book about Murakami’s life as a runner may contain many clever and insightful metaphors for his writing process.

They might help you become a better writer, but these chips contain so much salt, and monosodium glutamate that consuming them could cause you to black out and forget what you just read.

Finishing Mr. Murakami’s book may inspire you to become a runner, a writer or both. But, just finish a bag of Queso Cheese Ruffles, and you will want to sit back down on the couch and open another bag.