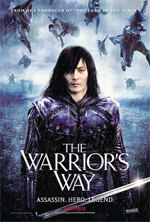 I went into this movie thinking to myself, “There are going to be cowboys and ninjas, but no pirates. It’s going to be mediocre at best. “

My hopes weren’t that high, but I was pleasantly surprised.

It might have taken two years to make, but you can tell the detail they put into it.

The movie is one giant combination of a western, a kung-fu movie and Final Fantasy.

It even has a princess, though she’s a bit young.

The movie starts out with a bang, with ninjas running across the tops of bamboo stalks.

In a short and violent fight, it ends with one of the ninjas impaling himself on a bamboo stalk “Mortal Kombat” style.

As for the no pirate problem, it gets solved quickly.

Can anybody say ninja pirates? That’s right, they went there.

I won’t spoil the surprise, though. It was pretty cool.

The movie isn’t all violence however.

There are many touching moments and comedy as well.

The story spends a lot of time on the interaction of the unnamed hero, who is referred to as the Sad Flute and an unnamed baby, who is later named April.

The baby is cute and expressive.

She is usually hanging from one thing or another, ranging from a sword to a clothes line.

You can tell that Sad Flute really cares for April.

You can almost feel his affection.

All in all, this movie was worth seeing, and will probably do very well.

My mother, who went with me and hates both westerns and kung-fu movies, actually liked the movie.

And by the way, don’t leave until the credits start rolling.