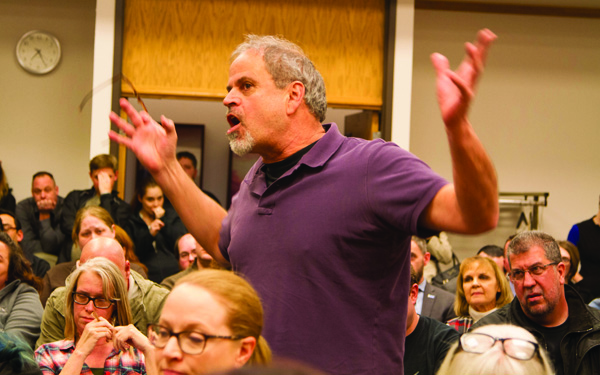 State Senator Ralph Shortey went toe-to-toe Monday with his constituents who were angered by bills that would roll back portions of state questions 780 and 781.

The bill 512 and 503 authored by Shortey, R-Oklahoma City, would repeal most of the sections of both state questions Oklahomans approved last November.

Shortey said voters were not given the correct information on the ballot when they casted their vote in November. He said people confronted him about the bills after the election saying, “we’ve got some concerns with 780.”

Many of these concerns toward the bills were aimed at “its penalty lowering possession of schedule one and two drugs to misdemeanors,” Shortey said. Shortey said the possession of some of the drugs for “personal use” included several drugs used in date rape cases such as vicodin, adderall, and ecstasy.

Despite his attempts to sway them, most of the 200-plus crowd pushed back. Daryl Gandy, local civics teacher, thinks that “it’s ridiculous that a man without a college degree is telling me what I do, and do not know.”

Former Speaker of the Oklahoma House of Representatives, Kris Steele, said Shortey was being disrespectful to voters when Shortey claimed they didn’t know what they were voting on.

“To say that these forms are flawed or that the people didn’t know what they’re doing when they voted in favor of these reforms–I think it’s disrespectful,” Steele, a Republican, said. “I think it’s dangerous for any elected official to ignore the wishes of his or her constituents.” 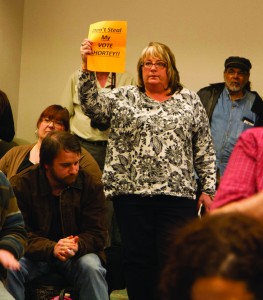 Anne Saunders, a nurse who attended the meeting, said she was concerned if the rollback provisions were approved it could affect her personally. Saunders said the rollback could mean prison time due to her neurological disorder. “I could go to jail under what Shortey is proposing right now just because I fall asleep behind the wheel,” she said.

Later in the meeting Shortey told the crowd he would not work the bill if it were to die on the committee floor. Many commentators were very skeptical to the idea that a person in government would stick to their word.

Saunders, the nurse, said she takes a schedule two drug everyday for her narcolepsy, a sleeping disorder. She said Shortey’s bill, Senate Bill 512, could cause her to be jailed for five years for having a loose pill on her during a routine traffic stop.

Records show that more than 57 percent of Oklahomans voted for state question 780, and 781.

While most of those who attended Monday’s meeting opposed the senator’s proposal, at least one member of the crowd worried that lowering current felony possession charges to misdemeanors could result in an increase in abuse cases.

Lorrie Poole said Oklahoma already has a ‘three-strikes’ rule in which a person can commit a crime three times until they are sentenced to prison.

David Hall, who attended the meeting, said the Geo Group, a private prison corporation, is the reason behind Shortey’s efforts against both state questions.

The debate over the new laws comes as Oklahoma continues to incarcerate an increasing number of residents. Records show the Department of Corrections incarceration rate rose from 25,434 total inmates in 2010 to 27,482 in 2014. Supporters say that if state question 780, and 781 are given “a chance to be implemented” then the prison population will decrease, costing taxpayers less.