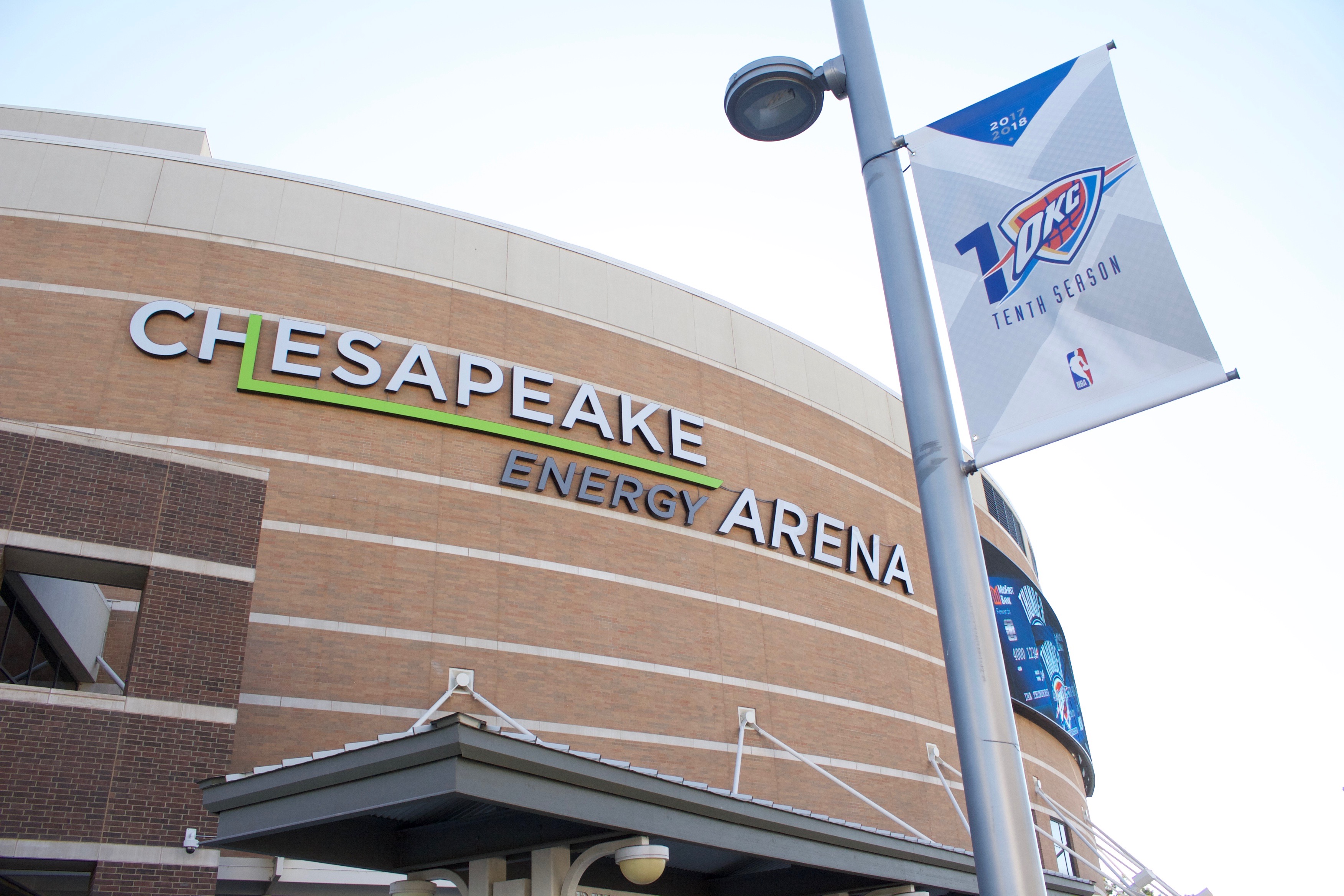 The tone Anthony and George set has made fans believe OKC can go all the way this year.

“If it goes like it did tonight, I think they can make it to the second or third round,” said Diane Rogers. Rogers said she looks forward to seeing OKC play against Houston again. She’s nervous about playing against Golden State, but knows that’s the game everyone is going to watch.

Standing outside the area were Randy Duckworth and Doug Hacking and they said they were believers.

Duckworth said the team “has all the pieces” to take the championship this year. “They shared the ball really well, giving Russell a break.”

“Russell didn’t even break a sweat doing a triple double,” he said.

Since it was opening night and the start of OKC’s 10th season, the celebration for the fans was a special one.

On every seat of the arena, were blue t-shirts with 405 in the center of it. The number 10 was highlighted in between the 4 and the 0, accenting this anticipated season. Free t-shirts on every seat is usually a playoff tradition.

“The celebration was really good,” Hacking said. “It made fans feels really appreciated.”

Diana Heusel also liked the celebration and was excited about the crowd that night.

She’s “very hopeful” about the team’s lineup this year. “I like it, I was impressed tonight. It was balanced and not a one man show,” she said. “We play as a team. We’re always moving on offense and they can take it this year.”

Standing alongside other police officers outside the arena was Oklahoma City Sergeant Cody Koelsch. He, too, is confident about the Thunder going to the championship.

“I think it’s our best chance this year,” he said.

Before the start of the season, there were many changes that have made Oklahoma City a unique and diverse team in the NBA this season. In July, the Indiana Pacers traded forward Paul George to OKC. In September, the New York Knicks traded forward Carmelo Anthony as well.

Westbrook staying has given Oklahoma City and the state much pride and hope.

“Zero is my hero,” Rogers said.

The same day Westbrook signed, Mayor of Oklahoma City Mick Cornett signed a proclamation, officially declaring every day from then on, as Russell Westbrook Day.

Westbrook said there is no place he would rather be than in OKC.

“I am so honored to have the opportunity to continue my career here with the Thunder,” he said. “From day one the support that Mr. Bennett, Sam, Troy and the entire organization have given me and my family has been incredible, and we are so grateful.”

“When you play in Oklahoma City you play in front of the best fans in the world, I’m looking forward to bringing everything I’ve got, for them, this city and for this organization. Why not?”

Westbrooks’s motto, “Why Not?”, is a growing phenomenon as it encourages people to believe in themselves.

“‘Why Not?’ is a mindset. It’s a movement. It’s something that I stand behind,” he said. “It represents self-confidence, self-swagger, and believing in yourself. That’s the motto I have in my life, and the motto I give to kids and people all across the world.”

The emergence of Westbrook, Anthony, and George has made them become known as the “Big 3” and a trio to watch out for in the NBA.

All three have something in common: they have never won an NBA championship. Despite each of them having a long and rewarding career, they hope this year they’ll be able to do that.

“We’re three guys that’ve been paired up and haven’t found ways to win. It’s not going to be about who’s getting shots. We want to win and that’s it,” George said. “It’s just that era where you got to face teams that are going to have two or three guys that can take over games and be iconic to this league. You have to have that to compete in this league.”

After the Knicks game, head coach Billy Donovan praised how their defense has been improving since the start of training camp.

“By playing great defense, especially this early in this season where probably most teams are trying to find their way, it gives you at least a little bit of room where if you don’t have a great offensive night you can really fall back on your defense,” Donovan said.

George was surprised by the atmosphere of the Thunder game.

“It was crazy. I thought the first preseason game was nuts. I thought that what Loud City was,” he laughed. “But obviously they can get louder.”

OKC played the Minnesota Timberwolves last Sunday and lost 113-115, by a buzzer-beater.

“Those upcoming plays were more controllable than that last play,” Adams said. “I’d definitely call that a hail mary sort of play. The plays before that came down to just discipline,”

It was a tight game, and Anthony said it was a matter of who was going to finish on top.

Westbrook said he sees some “sparks” on this team and that they can perform at a high level, but they just got to do it for forty eight minutes.