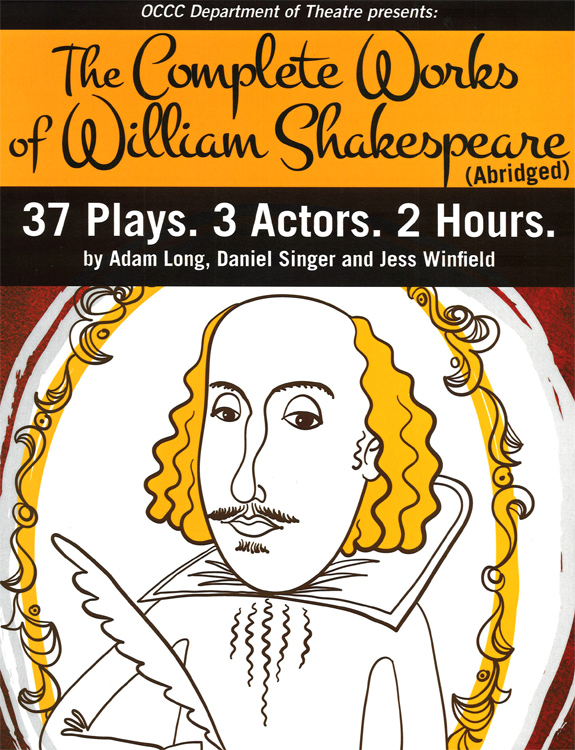 Portions of all 37 of the bard’s plays will be performed in less than two hours when drama students enact the parody “The Complete Works of William Shakespeare (Abridged)” Wednesday, April 30, through Saturday, May 3 in the Bruce Owen Theater.

“It is a loving tribute to Shakespeare but it’s also a very modern parody,” said theater Professor Brent Noel, who is directing the play.

“The theme behind it is that they’re trying to update Shakespeare to make it accessible to a modern audience.”

Two different casts will take on this show, an all-male cast and an all-female cast. There are three people in each.

Freshmen theater arts major Drake Mason said this is his first play on the OCCC stage.

“Probably the biggest challenge for me is going to be dialect as far as using different accents,” he said.

“We have to use an Italian accent, Jewish accent and Scottish accent.”

Grateful for having the opportunity to work with Brent Noel, Mason speaks highly of Noel’s directing talent.

“He pulls some stuff out of us that we feel like we never had within ourselves,” Mason said.

He said there will be a few surprises with costumes.

“I’m not going to discuss too much about the costumes,” Mason said. “You’ve got to come and see it.”

No stranger to the OCCC stage is sophomore diversified studies major Tia Lasiter.

Lasiter said Shakespeare is generally difficult because of the old English; however, with this production, it’s even more challenging.

Tickets are $10 for general admission and $5 for students. Wednesday’s and Thursday’s performances are free for OCCC students and staff.