The Birth Control Pill and Depression 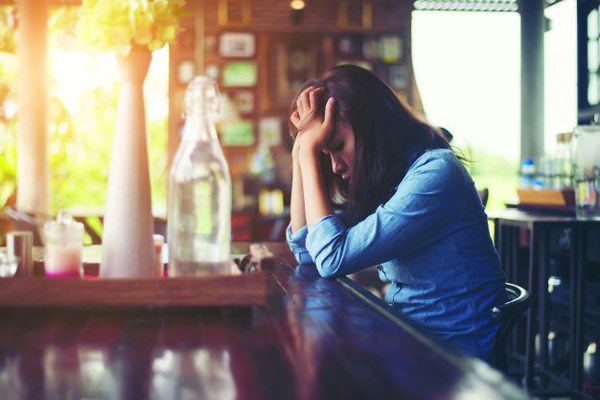 Having grown up in Oklahoma, I did not receive a proper sexual education. This is a shared experience among my peers.

Sure, we learned about how babies are made and what a cartoon uterus looks like. We learned about the value of deodorant and what tampons were – but never sex itself. It was an unspoken ritual, some secret act that was never openly discussed. By these unsaid standards, sex was off-limits, and birth control was a ticket straight to hell.

Educating teenagers on birth control would insinuate that sex was a real thing that real people did. Like most adolescents, I grew up knowing only that when a man and a woman loved each other very much…a baby was made.

When I fell in love for the first time, a baby was the last thing on my mind. Becoming sexually active spurred a terrifying, confusing whirlwind of figuring out how to keep that from happening. I found that worrying about an accidental pregnancy was not a turn on.

Too many times I heard “If you don’t want to have a baby, don’t have sex!” from stiff older women and youth group leaders. I still wonder what world they lived in. I guess it was a world where sex only ever occurred with the intention of bringing another human being into the world.

The reality is that teenagers have sex. Lots of it. With teen birth rates in Oklahoma being one of the highest in the country, it’s clear: teaching abstinence to teens just doesn’t work. Birth control does–although we haven’t tried heavy duty chastity belts (don’t get any ideas, lawmakers).

According to the Oklahoma Policy Institute, Oklahoma ranks second among all U.S. states for the highest teen birth rate. Clearly our teenagers are uninformed about their options. I know I was.

For sexually active teenage girls, pregnancy scares are frequent, and endlessly anxiety-inducing. It’s hard to focus in class when you’re sure that you’re pregnant. Your period is late and WebMD.com tells you sore gums may be a sign of pregnancy! The panicky question is louder than anything else: How will I deal with an unplanned pregnancy?

I was tired of worrying all the time, so I decided to get on birth control. The options were not endless, but there were many. The pill, the patch, the shot, the cervical cap, the IUD. It was intimidating. “I put what into my what?!” rang in my head. The pill was the least invasive option, so that’s what I chose.

I went to the pharmacy, and took home a plastic pack of 28 tiny pills. I took one the next morning, and threw up. For the next two weeks, I was on a rollercoaster of nausea and mood swings. No one had told me about how it would affect my emotional state. I cried out of nowhere. I got pissed off, and fast. This wasn’t like me. By the end of the third month, I didn’t recognize myself anymore. My mood swings had leveled out, but left me feeling robotic and unfeeling. The natural ups and downs of my menstrual cycle were gone, leaving an even, uneventful month. After month. After month.

Some women appreciate the predictability of their moods on the pill, experiencing emotions like clockwork.

I missed feeling human. I had no answers besides what my doctor told me: It takes a while to adjust. A while could have meant anything, but I hoped it meant soon. Exhausted and upset, I googled “birth control effects on mood.” I found that I was not alone in my experiences.

Jill Foster wrote an article for the Daily Mail about her experience with the pill. It echoed my own. She described how trying to pour herself a glass of orange juice nearly ended her relationship:

“Arriving home from a hard day at the office, tired and dehydrated, I reached into the fridge for the carton, poured out its contents — and the tiniest, meanest dribble of liquid fell into the glass. What can only be described as murderous rage surged through my body. I hurled the glass across the kitchen, sending it smashing into tiny pieces against the wall.

My boyfriend and I had a blazing row and I stormed out of the kitchen. Looking back, I’m astonished the poor boy was still in the house when I sheepishly returned an hour later. Especially when for weeks I’d been irritable and moody, barely wanting to touch him, let alone sleep with him. But stay he did. He is now my husband and he still refers to that moment as ‘the time you went a bit psychotic.’ He also admits it’s the closest he’s ever come to ending our relationship.”

Reading Foster’s account of her own pill-induced hysteria made me feel a lot less crazy. I had been convinced it was either the pill or my own insanity that was the source of my violent ups and downs. I was relieved to know it wasn’t insanity. I was also relieved to know that my loss of a sex drive had a reason. A study of more than 1,000 women at Germany’s University of Heidelberg proved that taking the pill dramatically decreases libido and arousal. So there’s research proving that the pill changes women’s sex lives. Got it. But when it comes to the emotional effects, the research runs drier.

Every article I came across from a woman’s point of view was accompanied by hundreds of women who shared their own similarly negative experiences in the comments section. There were so many women who, like me, had wondered if they were just going crazy after taking the pill. But for every personal account I read, there was a research-based rebuttal, stating that the pill caused none of the things any of us had experienced.

We couldn’t all be crazy…could we?

Holly Grigg-Spall, author of Sweetening The Pill: Or How We Got Hooked On Hormonal Birth Control, has had little faith in the medical community when it comes to taking women’s experiences seriously.

“Experts — mostly men — have lined up to tell us not to be alarmed, concerned or deterred from using hormonal contraceptive,” Grigg-Spall wrote.

A recent study by the University of Copenhagen says otherwise, though. The study, published in the Journal of the American Medical Association Psychiatry, took place over 13 years. It found that younger women taking the mini-pill were 34 percent more likely to be diagnosed with depression than those not on hormonal contraception.

The study is important for women like Grigg-Spall and me who have been told there was not sufficient research to back up our experiences, and that it could have been anything else. It’s important because it helps us understand that our experiences are valid.

“Depression from hormonal contraceptives may not be the experience of every woman, but that doesn’t mean it’s not the experience of many women who, in reading about this study, could have their lives changed for the better,” said Grigg-Spall.

The Psychoneuroendocrinology Journal published a study in 2013 that tested whether or not feeling depression on the pill was a placebo stemming from hearsay about its potential effects. The study tested this with 34 women who said they felt strange on the pill. The women were placed in two randomized groups, with one group taking placebos, and one taking the actual pill. At the end of the study, the women who had been taking the actual pill without knowing had higher scores of depressed mood, mood swings, and fatigue than the placebo users. It was both gratifying and disappointing to know there was a reason for my inner chaos. I had gotten on the pill for a reason, hoping to help deter anxiety, but ended up feeling worse than before.

At the end of six months on the pill, I decided to stop taking it. It took a while to get back to where I was, and for my period to come back normally. But I was me again, and I was happier. For the past year, I have been hormone free. Only recently did I decide that I was ready to try another form of birth control.

I found that the Kyleena IUD best suited my needs. I’m still struggling with emotional reactions to the hormones, but the ups and downs are much softer. Still, I wish I had been aware of the effects prior to taking the pill.

Further research is essential to making sure young women are aware of the emotional side effects that may come from hormonal birth control. Perhaps more studies will help expand the knowledge among young women looking for options, and help doctors better identify the cause of depression in those taking the pill.