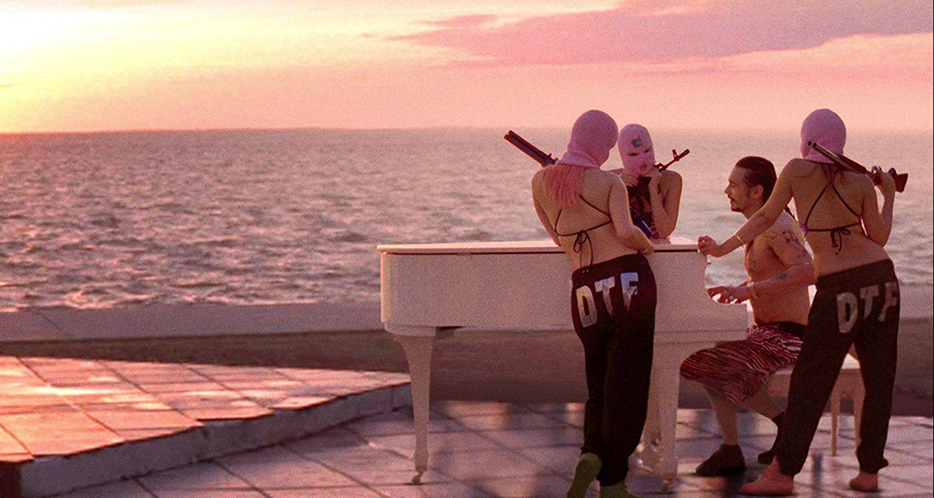 Harmony Korine’s 2012 film “Spring Breakers” is an understated and underappreciated classic. The critics of the film don’t like the fact that they look at the screen and see a mirror–they see a future they don’t want to face.

Korine’s genius portrayal of a spring break gone the way of “Scarface” was heavily critiqued and bashed by audiences upon release. Vocal cries of inconsistent tone and pretentious stacked metaphors echoed through audiences. Critics saw it from a completely different perspective.

On the first viewing, the film immediately struck a chord with me. I understood Korine’s film and the message he was trying to convey.

“Spring Breakers” revolves around four college girls named Faith, Brit, Candy and Cotty. Unsatisfied with their mundane college lives, they have been saving up for spring break all semester. Students are leaving campus to enjoy their vacation. The four girls are left counting their dollars, which are too few in number to take them anywhere.

Faith sums up their entire mindset for this trip (and the girls’ eventually bloody ending) with a diatribe about complacency and boredom from normality.

“I’m tired of seeing the same thing. Everybody’s so miserable here because they see the same things every day, they wake up in the same bed, same houses, same depressing streetlights, one gas station, grass–it’s not even green, it’s brown,” she said.  “Everything is the same and everyone is just sad. I really don’t want to end up like them. I just want to get out of here. There’s more than just spring break. This is our chance to see something different.”

Refusing to miss out on spring break, the girls, sans Faith, rob a restaurant to have enough to travel to St. Petersburg, Florida.

Not wanting their experience of spring break to ever end, the girls descend into a life of crime. There is so much to unpack about this film and the underlying commentary on modern-day capitalism, superficialities of millennials and fetishization of hyper-stylistic violence.

Korine’s direction frames it in a way that inspires interpretation instead of solely being a film about crime and partying during spring break. Korine lingers on uncomfortable shots of partying to unnerve the audience instead of stimulating them with their alluring power of colorful freedom. It becomes a Jell-O shot of deep reflection on the audience to show them how incomprehensibly wild these girls get. It makes the audience second-guess themselves.

Korine isn’t making fun of these girls or shaking his head at this generation. He isn’t even saying that spring break or the party culture in general is a bad thing. He wanted to stimulate with his images of partying while provoking in the same breath. No judgment is made about the main characters or the culture they grew up in. Korine just wanted to have a little fun while discussing our current state of modern-day reliance on overt stimulation from a culture that is never satisfied.

It isn’t for everyone – the film or the culture explored in the film. Faith (played by Selena Gomez) seems to be a devoted Christian, but is just as excited to party with her girlfriends on spring break. She’s also the first one to leave Florida when things start to take a turn for the worst when they get introduced to a local rapper/gangster named Alien (played by James Franco). As soon as Faith leaves the girls, the girls lose faith in escaping the lifestyle of crime they willingly fell into.

Pop culture seems to be the reason for the girls’ descent into crime. Before they rob the restaurant, the girls keep repeating “just pretend it’s a video game” over and over until their comments become like a chorus of a hit single. There seems to be no consequence for their actions. When one of the girls gets shot in a drive-by, the other girls let her leave Florida and continue on their path that ends in countless people being mowed down by bullets. This is the reality these girls live in. They aren’t satisfied rapping their favorite songs; they want to live them.

James Franco’s character seems like an overblown parody of a rapper lifestyle at first, but he’s created by the same culture that birthed the girls. Faith sees Alien and the culture he represents as fake and leaves town. She sees how vile the culture she’s involved in can become. The rest stay because he is normal to them. Faith’s departure represents those who dabble in the party culture when it’s safe, but can’t handle the dark side of it. Alien’s lifestyle is like the hangover personified for a lifetime.

The girls never want to live in the mundane of modern day corporate America. They essentially want to be free forever. They want spring break–a permanent vacation to live out their most primal needs– to last forever. This needs to happen before they get bogged down in the “real world,” where a week of things that are all fleeting can live forever.

Twirling guns in the sunset. They have a life of which they don’t know the consequences. They make-believe. Pretending it’s just a video game. They want to be at the party and they want everyone to know.