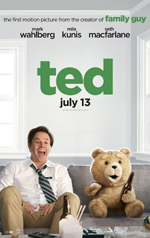 We all know teddy bears are cute on their own, but what happens when you personify one as a vulgar 20-something-year-old pothead who just wants to party? Throw Mark Wahlberg in the mix with Seth McFarlane’s writing and you get “Ted” – both an entertaining and hilarious movie.

As expected, the movie begins with a little glimpse into the childhood of John Bennett (Wahlberg) and how his soon-to-be best friend came about.

Unoriginally enough, the kid version of John simply wished for his teddy bear to be able to talk to him one night, but how else did you expect it to happen? After freaking out John’s parents that next morning, you fast forward about 27 years and the meat of the movie begins.

Over the course of the movie, the interactions between John and Ted are like that of actual best friends. The witty discourse laden with derogatory insults between the two remind you of any group of 20- to 30-year-old guys just hanging out as normal, and as a result, the funniest moments are heard here. What did come as a surprise was the angle of maturity, growing-up, and even a little bit of a love story.

Mila Kunis plays the role of Lori, John’s girlfriend of four years, who battles Ted for the attention of John. While unexpected, Lori’s involvement allows the movie to have an actual storyline and accompanies the two stars pretty well, adding her own humor to the fray.

All in all, Ted is what you’d expect. A talking teddy bear that gets himself and his best friend in to some peculiar situations — with amusing results.

For Seth McFarlane’s film debut, “Ted” is no let down. Especially for “Family Guy” fanatics, as “Ted” is about as close as you can get without it being fully animated.