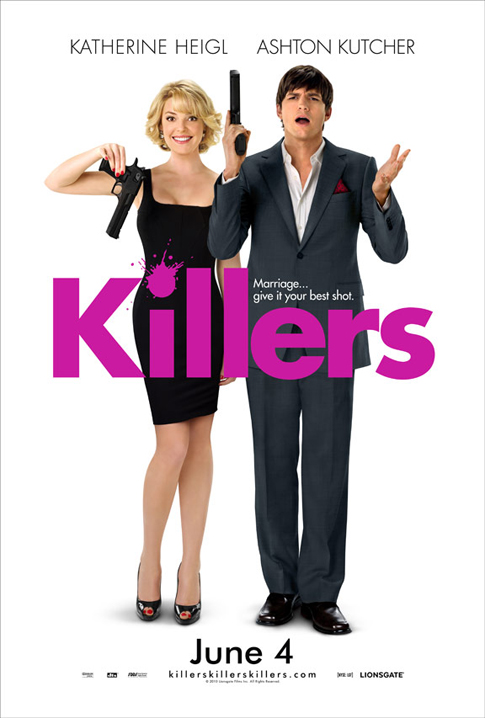 Katherine Heigl is back in a fast-paced, clever romantic comedy featuring Ashton Kutcher as her sexy costar in “Killers.”

Jen Kornfeldt (Heigl) is your average, beautiful computer genius recovering from a bad break up when her parents invite her on a European vacation.

Mortified at vacationing with her parents, she accepts an invitation to dinner from Spencer Aimes (Kutcher), a mysterious and romantic hunk of a man.

Unbeknownst to Kornfeldt, her dream guy is a former agent for the CIA who left a lonely but promising career to be with her.

Fast forward three years. Suddenly, Jen and Spencer are forced to dodge bullets from people they thought were their neighbors and friends.

Spencer must come clean about his past and together, they have to find out who has put a multi- million dollar hit on them.

The action is suspenseful and at times, the film is hilarious. Heigl brings her girl next door charm and her performance is genuine. The chemistry between Kutcher and Heigl has moments where it sizzles but lacks a certain something special.

To his credit, Kutcher performs well in his high action role.

Unfortunately, the script calls for a personal revolution in Aimes that is out of Kutcher’s typically comical comfort zone. He does his best to be sincere, but the air is thick during deeper scenes in the film.

Tom Selleck turns out a surprisingly fun performance as Aimes uptight father-in-law. Catherine O’Hair is the highlight of the entire production as Aime’s alcoholic mother-in-law.

The writing is inconsistent, which leaves uncomfortable moments throughout the film. But, all in all, the film is solidly funny and suspenseful.

The action and comedy work together to bring about an unexpected climax that will have viewers on the edge of their seats thinking “really?”

Although the plot is farfetched and slightly unrealistic, the film is a typical Hollywood production of secret agent meets unknowing blond. It is a feel- good movie without a lot of depth that may be better reserved as a rental rather then a night out at the theater.