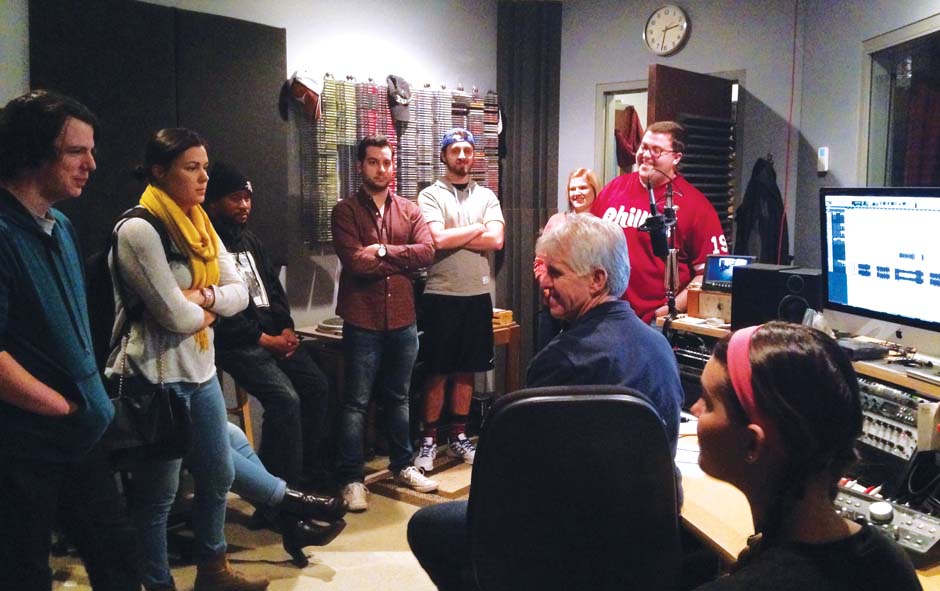 Before beginning their next class project, 12 students in Professor Gwin Faulconer-Lippert’s Audio Production class received advice from sound recording professionals when they visited RK-1 Studios in Edmond this semester.

As part of the tour, Randy Kemp invited the group into his workroom and played a number of radio spots, some old, some new, and most still played on air today. Kemp is RK-1 Studios founder and owner.

He said he wanted students to listen to the do’s and dont’s of radio commercials. He also went on to explain a concept, “theater of the mind.”

“If you can put the listener in a place, and let them paint the picture in their head with the sounds, and the words, and the music that you choose, then they get to participate in the creative process with you,” Randy Kemp said. “If you complicate the message, with a whole lot of stuff, it just goes downhill.”

Faulconer-Lippert said she instructed students to watch Kemp’s face and body movement as he stepped into the booth to record a commercial, so when they returned to class, they could apply his techniques when they recorded.

“I really liked how we got to see him do a commercial and realize it’s OK to mess up and go back and redo it,” said Ashley Guyer, broadcast journalism major.

RK-1 Studios is in the business of recording commercial, film, video, and much more.

“There’s nothing more engaging and real, than to see an outstanding professional doing his work in his work place,” Faulconer-Lippert said. “The reward is when the teacher and the students learn something, and every time it’s a highlight of the semester.”

When this reporter tagged along, students witnessed a commercial in the making in the “green room” while Kemp led the group through a two-hour tour of the studio.

Kemp has 45 years of experience and recognitions including the American Advertising Federation Silver Medal and Sterling Service Awards.

Randy Kemp agreed and the rest is history.

Although he has no official ties with OCCC, Kemp was inducted into OCCC’s Alumni Hall of Fame in 2014. Faulconer-Lippert said she nominated Kemp in recognition for his continuing participation with OCCC students through studio tours.