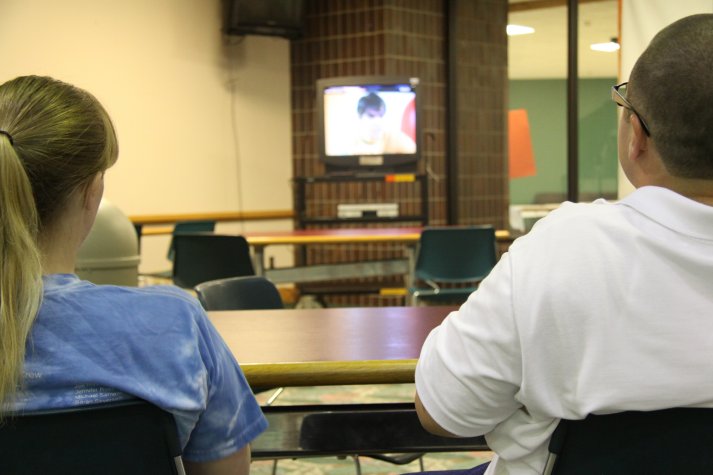 “We are screening (the games) so that students either passing by or with a lunch break or whatever can sit down and watch the games,” Stephanie Baird, first year and Student Life Programs Coordinator said.

The games will be shown every class day through the first weeks in July. Admission is free.

The showing starts at 9:30 a.m. until the last game of the day near the windowed wall of the Union.

Baird said screening the World Cup is something Student Life wanted to offer students during the summer, since not many sports programs are usually on.

Those who watched the games last week ate free popcorn and shared in camaraderie.

“The students are interested and it’s a very easy thing for us to do, you know to provide a T.V. and turn it on and have some popcorn for them,” she said.’

“It’s a good way for the students to meet other students and to enjoy their company,” Baird said.

Rodolfo Ivan Monsivais, who works for Student Life, said he has been enjoying serving popcorn and watching the games.

Last week over 106 students participated during one five-hour span he said.

Yosef Menjiavar, undecided, said he enjoyed what Student Life has been doing.

“In between classes or whenever I have free time I don’t have to go all the way home, like if I have another class later, I can just watch the game over here,” Menjiavar said.

Since Menjiavar’s father played soccer, as did Menjiavar, the World Cup is a meaningful passtime at his house, he said.

Despite living in the United States, Menjiavar said he has been rooting for Argentina and Spain, while Monsivais cheers for Mexico.

Baird who isn’t much of a fan, said she also has been watching and cheering for the U.S. team.