‘Orange is the New Black’ sure to become cult classic 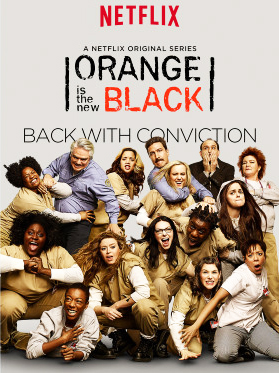 It’s rare when a television series can cause a grown man with a full beard to shed tears of both sadness and joy; however, the Netflix original series “Orange is the New Black” accomplishes just that.

From the creator of award-winning television series “Weeds” and based on autobiographical events, “OITNB” blends the perfect balance of drama and comedy while exploring the back stories of female prisoners doing time in a New York penitentiary.

The second season of “OITNB” premiered on Netflix Friday, June 6, and I’m pleased to say it successfully surpassed season one.

While the series’ main focus is the story of Piper Chapman — a woman who’s been sentenced to serve time for a crime she committed several years prior — the histories of the other inmates also are revealed in each episode.

In prison, the inmates barter for toiletries, compete for turf and segregate themselves into groups according to race. There are constant power struggles and conflicts occurring among the groups as well as scandal and betrayal occurring within them.

While most of the inmates are serving time for committing non-violent crimes, the poor prison conditions often cause tensions to escalate and tempers to explode — providing entertainment as well as raw emotion.

Outside the bars, the warden embezzles endless amounts of federal money, the prison guard impregnates an inmate, and Piper’s family and former fiancé face their daily struggles while living with a loved one in prison.

Decorated with social commentary ranging from equality issues and women’s rights to police brutality and federal financial exploitation, “OITNB” always has an underlying joke beneath the apparent one.

It’s rare when highbrow humor can complement a toilet joke, but “OINTB” boasts an arsenal of clever one-liners, and historical and literary allusions perfect for both old and young audiences alike.

Despite its comedic undertones and witty banter, however, I’ll admit the show contains some gut-wrenching content not safe for viewers under age 15. There’s also a sex scene in nearly every episode.

Moreover, while “OITNB” causes quite a bit of laughter, it can also cause some self-reflection.

The show teaches audiences about the importance of the little things once everything else has been stripped away.

With a colorful cast of characters, social commentary in every joke and a convoluted storyline, “OITNB” is sure to be a cult classic in years to come.