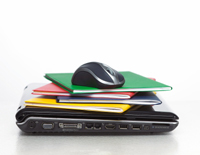 The college first started offering online classes in 1999 with just a few class offerings. As of this year, OCCC offers more than 100 online classes.

And, 16 years later, Professor Stephen Morrow is convinced the ideal course combines the best of the classroom and online worlds.

“In the English and Humanities division we’re working hard on this idea of a hybrid class that could bridge the gulf between online and in-class,” he said.

Morrow said he’s eager to experiment with his classes to find a medium between the traditional classroom and the online one. He said his critical thinking class will be part of the experiment.

Half of the learning will be done online and half will be done during regularly scheduled, on-campus class times, Morrow said.

“That’s always been my dream, to put this course together that teaches self-reflection and professionalism together,” he said.

Morrow said roughly 600 students have taken the critical thinking class he’s developed and, with each semester, more students are succeeding in the online version of the course.

Currently, Morrow teaches online courses as well as the more traditional, on-campus courses. He said online classes, in accordance with the mission of OCCC, are a way to offer expansive access to education.

While online education offers its challenges — and an additional $12 per-credit -hour fee — Morrow said, the school is dedicated to improving the success rates of online students.

“Last year I was on a committee where we looked at online learning at Oklahoma City Community College,” he said.

“There were professors and administrators and experts on this committee, and we made suggestions thinking, ‘what do we really need for this college to be a high-quality online college?’

“One thing that’s being funded is mandatory training in best practice online for all faculty and all adjuncts. It’s a very positive response for the college putting their money where their mouth is.”

Morrow said the trend since the inception of online classes, here and elsewhere, is a higher rate of failure among online students than those taking the same courses in a classroom. But times are changing, he said.

From a Student’s Perspective

Annalyn Gill, who formerly worked as an adviser and graduated from OCCC, has taken several online courses. Gill said student success in online courses begins with the school and its professors.

She said those professors who make online courses too easy aren’t doing students any favors.

“A professor who doesn’t ask for essays in their online course is no great professor,” she said.

She said multiple choice quizzes and tests can be mastered, sometimes dishonestly and without any real understanding of subject material.

“That’s no real measure of success for a student or a professor,” she said.

Gill said she’d like colleges to hold professors and their courses to a higher standard, assuring real success.

“I think if students can’t pass their online courses with a C or better they should be locked out of taking online classes,” she said.

Gill said there should be requirements for students who fail online classes to demonstrate an understanding of study skills and some measure of improved self-discipline before being allowed to take online courses again.

“Because obviously you need more help and some attention (in person) or you’re going to fail again,” she said.

“I really think you shouldn’t even take online classes in your first year.”

Morrow said OCCC is training professors to be accountable for online success and he’s studied the pitfalls.

“The number one reason for failing online is lack of discipline or time management,” he said. “The number two is lack of connection, whether student-to-student or teacher-to-student.”

However, Morrow said, OCCC professors work to mitigate these issues.

“There’s a lot of support just to help students succeed,” he said.

Gill said students have to hold themselves accountable as well and should know some important things about online learning before enrolling.

“Not every teacher gives feedback,” she said, “but if you know you can’t succeed without regular feedback, maybe an online class isn’t good for you.”

Gill said online students need to be self-disciplined and hardworking, often more than they’d be for on-campus courses.

“There’s this idea that you can just log on whenever and put things off until you’re ready or do all your work at the end of the semester but that’s not the case,” she said.

Gill said students should be aware that classes online still sometimes require collaborative work and students who never meet in person may have to depend on one another.

Morrow agrees that students have to be self-motivated and able to prioritize.

“Like my students learn, you really have to schedule your online work the same way you schedule going to classes throughout the week.

“But then again,” he said, “we get some students who don’t realize they have to come to class for traditional courses either.”

“Online classes are like any other class,” he said. “Students get out of it what they put in. Just like in a traditional classroom, being proactive with assignments and discussions is half of a decent grade.”

Morrow said his personal focus is on creating connections.

“I want our kids to be better human beings, and part of that is that we’re on computers a lot so let’s do that but let’s keep some connection going too.”

He said he has enjoyed watching ideas about online classes develop in spite of occasional egos suggesting students can’t succeed without their teacher’s physical presence.

Morrow said he remembers correspondence courses that were available before the Internet was available.

Students were sent materials and tests by mail and would earn degrees by mailing those items back to the college.

He said online learning is an extension of this idea, giving access to students who might otherwise be unable to pursue higher education.

Meador said OCCC used an entirely different online learning platform called Blackboard until he graduated in 2012 and the school switched to Moodle. He said online learning has undeniably developed greatly in just a short period of time.

Morrow said there is no turning back.

“This online stuff is out of its infancy,” he said, “It’s getting pretty sophisticated at this point and soon, it’s going to be taking strides into its adulthood.”

As students must, he said he’s had to regiment himself so that even while far away he can facilitate that valuable exchange between teacher and student.

Morrow said the physical proximity of students to himself or to one another doesn’t concern him. Some students, he said, are going to find themselves more comfortable interacting from afar.

“I’m not really worried about people with technology disconnecting from each other,” he said.

“It’s not a big fear or worry for me because I think human nature will go where it needs to go and that’s with human connection.”