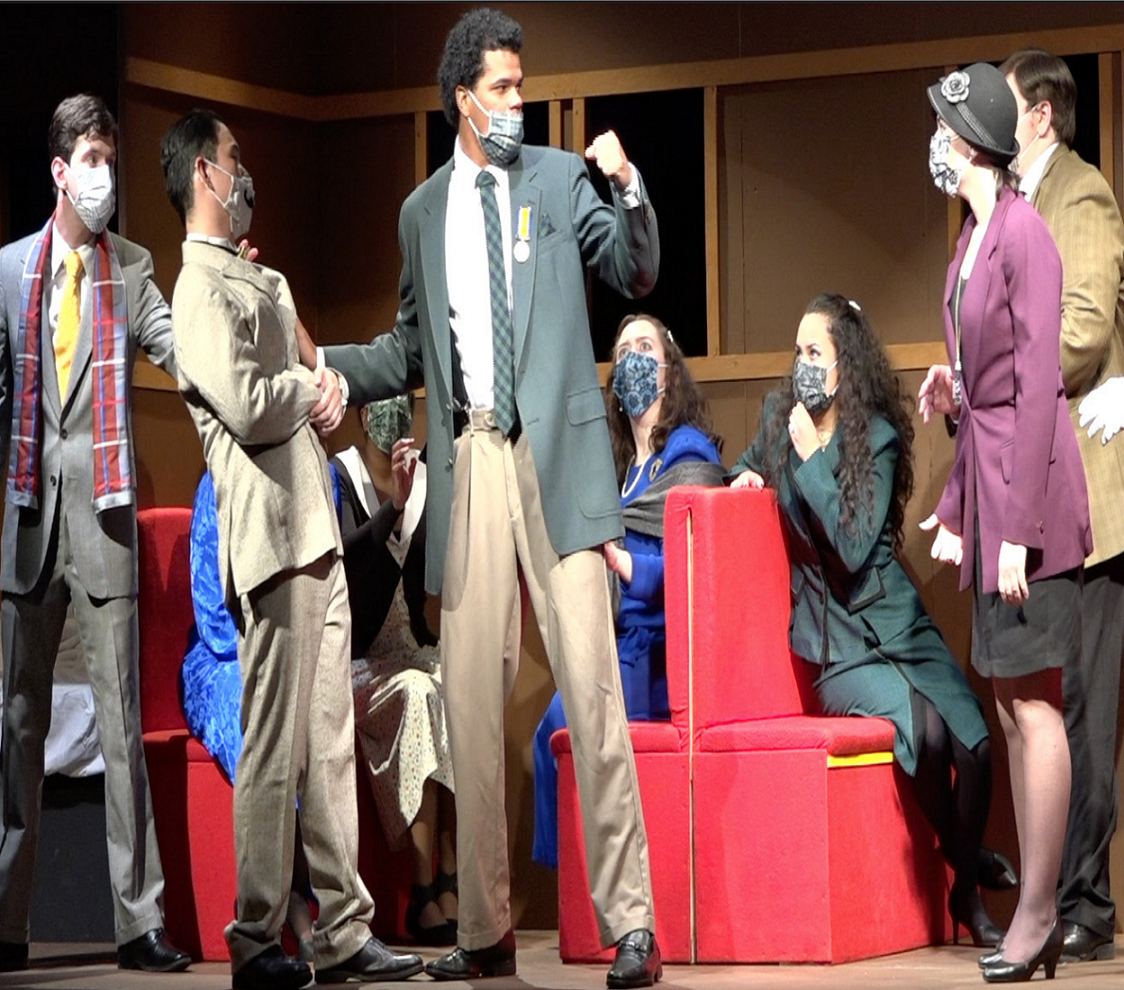 The cast of Theatre Professor Don Russell’s adaptation of “Murder on the Orient Express” killed it April 27.

The play was absolutely outstanding and one that would fit in well at the Lyric Theater—a huge step-up from what community college theatre is expected to be.

The cast wore masks throughout the play—one even had a mustache painted on it – and they distanced from each other in a way that seemed natural and felt intimate.

The actors not only stuck every line but many of them pulled them off in continual perfect European and other accents – a rare feet even for much more seasoned performers. And, their acting seemed just the opposite of forced. They often seemed to have lived their roles – perhaps in different lives?

Without a doubt there were several standout scenes during the 1.5 hour play

Greta Ohlsson’s (Taijza Wilson), pleading lines of fear and concern at times likely caused some audience members to desire running up on stage to protect her.   The audience’s empathy for her was palatable because of her ability to elicit such emotion.

Another skillful scene was between Colonel Arbuthnot (Mikael Shatswell) and most of the cast, including Hector MacQueen (Aiden Bryant) and Mary Debenham (Michaela McCall) as Arbuthnot threatened to punch Inspector Hercule Poirot (David Hoang) to a pulp.

But the play, which is well known for  intrigue, scandal and a hint of violence was much more.   It had great moments of hilarity—such as when Helen Hubbard (Xochilt Plascencia) danced and sung (intentionally too loudly) so much in her train car that her gun-carrying neighbor in an adjoining car Samuel Ratchett (Daniel Agraz) almost lost his mind  Her and his antics played off each other perfectly and at one time he seemed that he might actually shoot her if she kept up her caterwauling.

Further, the radio dialogue between the train conductor and the station (after the train was stuck in deep snow with a murdered passenger on board) –had everyone laughing with the perfect line “and how are things with you?”

Hands down, though, the best part of the show was near the end when Inspector Hercule Poirot deduced who killed the unlikable Samuel Ratchett. His vocal pacing, intensity, and commanding nature filled the entire stage (even though he stood with the cast in a space only about 6-by-6 feet).

He made the audience forget they were watching a play as they hung on his every word.

And what is a standout play without a strong set?

Whomever designed and then built the set were geniuses.

The set was transformed from an elegant restaurant, to a train boarding area, and then inside a train where the major action took place.

The builders created elegant seats (just as one would expect on the Orient Express) as well as two train cars, complete with beds and doors separating the sleeping quarters for each passenger.

But, no one would have ever guessed that the crack crew of designers would create an actual wooden wall that somehow glided on a track to allow the audience a complete view of the sleeping cars, which contained one dead body. Incredible ingenuity.

Murder on the Orient Express was riveting, funny, serious, cheeky, and stunning. From lighting, to costuming to acting, the students should be as proud of them as surely Russell is. And Russell should get many standing Os for bringing live theater back to OCCC in such a remarkable way!

Congratulations and thank you to the amazing cast: