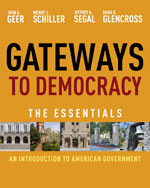 Bridging the gap between dry fact and epic story is a challenge faced by every textbook writer, including Professor Dana Glencross.

The OCCC professor has co-authored a political science textbook that will be used at more than 25 college campuses across the U.S., including this one.

The textbook “Gateways to Democracy” is a political science textbook that Glencross hopes reads more like a novel rather than a textbook. Each chapter begins with a real political dilemma faced by a college student that leads into the theme of the chapter.

The Wadsworth Cengage Learning website, www.cengagesites.com, says the idea for this format is to get students to engage positively in discussion about government topics that affect their own lives.

“Gateways to Democracy” leads every chapter with stories of students that have taken action to make changes in society. One example is S.R. Sidarth, a 20-year-old computer engineering and American government major at the University of Virginia.

The book states that he was following and filming U.S. Sen. George Allen on his “Listening Tour.” One of the recordings, according to the text, caught Allen calling Sidarth a name that had racial overtones. Sidarth placed the video on YouTube causing Allen’s campaign to plummet.

“Gateways to Democracy” also gives past and present examples of Supreme Court cases.

“This book takes first-hand stories from college students in the beginning of every chapter,” Glencross said, “The students I’ve had look at the book or look at a chapter say they can’t put it down.

“That’s not the typical reaction for most government textbooks. I think it makes this one unique.” Glencross said the theme of the book is about how to interact with government and how to get into government which was something that attracted her to write her portion of the book.

She said that she was approached by Sally Dennehy-Madoux, a local sales representative for Cengage Publishing, to help write and edit the book. Glencross said she was reluctant to accept the job at first, but was happy that she did.

“One of my two main goals was to see what’s not in the chapter that needs to be, make suggestions for changes, and then reduce their book by 20 percent,” Glencross said.

Glencross said she was a little intimidated when she saw the universities the other authors were coming from. However, once she finished the project, she was very pleased with the outcome.

“When I heard who the other authors were and where they were from, Vanderbilt, Brown, Stony Brook, I’m like how does a community college professor fit into this?” Glencross said with a chuckle.

Geer, the co-author and professor at Vanderbilt University, said in an e-mail message that he too enjoyed the project.

“Writing ‘Gateways to Democracy: The Essentials’ was a labor of love in many ways. Each of us enjoys teaching and wanted to use this book as another way to communicate with our students.

“It is important that students have an up-to-date and accurate account of American politics, especially in this era of heated partisan debate,” Geer said.

“Professor Glencross was a key part of our team and helped to make this book not only possible, but also, in my view, a success. Oklahoma City Community College is lucky to have such a wonderful professor on their fine faculty.”

“It was an enormous pleasure working with Professor Glencross and my other co-authors on the book. I think John speaks for all of us.”

“Gateways to Democracy” will be used in all American Federal Government sections at OCCC starting in the fall of 2011.

She said she hopes her students enjoy her book but do not feel nervous about using her textbook in class.

“I’m a little bit worried that maybe some students are going to be intimidated and think, ‘I don’t want to take that class because she wrote the freakin’ book. How hard is that going to be?’” she said.

She said she welcomes feedback and interaction from her students and hopes they will still enjoy attending her classes.

Glencross said her contributions throughout the book took about two years to write. She said she never really thought about what it would be like to a published textbook author.

“It is a very labor-intensive process,” Glencross said. “I really never thought about what it’s going to mean when you’re done.

“This is going to have my name on it,” she said.

The publisher’s website, www.cengagesites.com, has already been receiving reviews from many university and community college professors who have reviewed the book or will be using the book in their classrooms in the future.

Glencross has been teaching for 25 years. She has a bachelor’s degree in English and a master’s in political science. She has been teaching at OCCC since 1989 and has received numerous awards including the President’s Award for Excellence in Teaching.