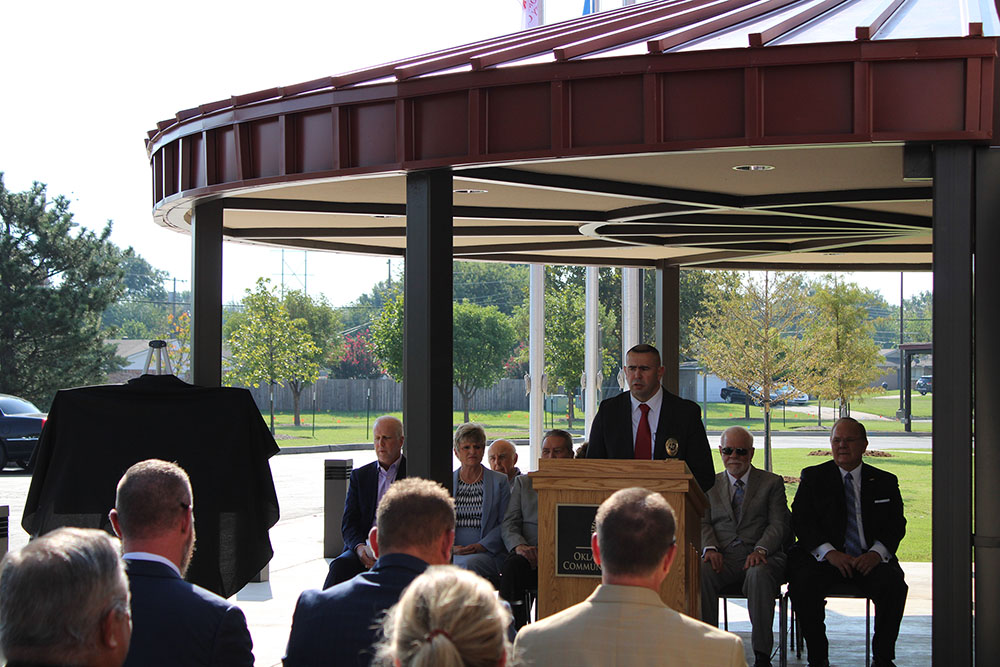 After more than a year of planning, renovation and construction, OCCC celebrated the completion of the new Campus Police Headquarters, Sept. 16, on the southeast side of campus between Faculty Circle and South May Avenue.

The headquarters’ opening marked the first time in modern memory when the campus police were housed in a building separate from the college’s Main building.

Piazza explained how the new building, which once served as the Child Development Center and Lab school, offered many improvements over the previous campus police station.

Size is one of its largest benefits, he said.

He noted the police force needed room to grow, as 38 full time, part time, and student workers worked out of one medium-sized room with no walls or cubicles in the Main building Room 1K8.

Another benefit of the new building is its use as a crisis response center.

With the newly designed building, the area  can be used as a command post to respond to an on-campus crisis, be it a shooting, fire, explosion, airplane crash, tornado, or any other crisis.

The new building is a hardened site, able to withstand an F5 Tornado giving the facility ability to maintain operations no matter the emergency.

Of course,having a new building won’t cause officers to stay inside. Rather, they’ll be out with the college community as they’ve always been, keeping them safe, Steward said.

“It might be nothing more than walking students or employees to class after an evening event when they’re a little apprehensive. It might be jump starting car battery, or helping students find a location on campus,” he said.

“There’s always routine enforcement of speeding and parking violations and unfortunately there’s a necessity to enforce laws that are more serious than that where crime occur on our campus.”