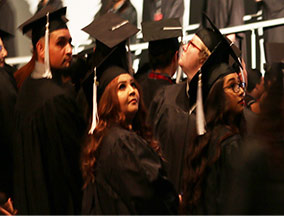 When students finish their high school requirements and graduate, many often get gifts such as flowers and cards.

But over 100 OCCC students who completed their high school equivalency exams and received their diplomas Friday night were given a non-traditional gift from college President Jerry Steward.

Steward awarded each student a $500 scholarship to attend OCCC starting in August.

Steward said he offered the students $65,000 in scholarship money collectively in hopes they would continue learning.

“What this means is you can take a four-credit course in the fall to get you started with your college training. That will cover your tuition, your fees and plenty of money left over to buy your books,” he said.

“Once you are here and you finish this first semester, we’ll be here to help you as well.”

About 130 students who left high school before they finished were honored in the packed-house graduation ceremony in the Visual and Performing Arts Center Theater.

All seats were taken with celebrants, leaving some family members and friends to stand and yell from the back of the second and third floors as the president presented the award.

“This is amazing!”  Oklahoma City resident Delores Hayes said. “I can’t believe it.”

Hayes said she was celebrating her fiancé Vincent Segura, who had been taking classes for two semesters.

The high school equivalency diploma is accepted by employers and colleges the same as a traditional high school diploma. It is awarded to students who take classes and show a mastery of high-school level material on the High School Equivalency Test.

Lemuel Bardeguez, vice president for Community and Workforce Development, said the students who earned the diploma reduce the number of state residents who don’t have any high school credentials.

“According to the most recent US census, there are approximately 400,000 Oklahomans without a high school diploma.  In Oklahoma and Canadian counties, there are over 70,000,“ he said.

“I am delighted to report that since our last graduation, 467 individuals have passed the exam,” and the 130 graduates who crossed the stage are no longer counted in those statistics, he said.

Smiling widely, while holding two children on his lap, he said Henson had to work hard and graduate to put her family first.

“She’s gone through the struggle. She had to drop out for her family,” he said. “Now she gets to succeed for her two little girls. I’m just happy.”

Bardeguez said he recognized the students’ efforts, and said earning the diploma is a significant achievement in their lives that should  be celebrated.

“Many of you have overcome great odds to celebrate this achievement,” he said during the ceremony.  “Your diploma represents hard work, commitment, tenacity and ambition to cross this finish line. And those attributes will always serve you well.”