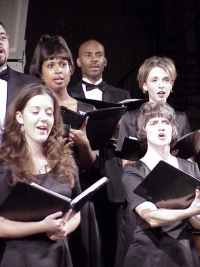 The concert will take place at 7 p.m. April 19, 20 years after 168 people lost their lives to an act of domestic terrorism in Oklahoma City.

The performance will take place in the Visual and Performing Arts Center. Tickets are free.

“The definition of a requiem is a mass for the dead,” Staton said. “So the whole idea is to honor the lives lost in the bombing.”

Learning the complex pieces is a challenge to vocalists.

“Typically we do two concerts a semester,” Staton said.

“Doing the Mozart requiem is really advanced and time consuming.”

For that reason, there will be only one concert this term.

About 150 students make up the three choirs, who will all be singing together.

The choirs will perform along with the Westminster Orchestra of Oklahoma City, Staton said.

OCCC’s Symphonic Community Choir members are comprised of OCCC students and also members of the community who enroll and sing for pure enjoyment, Staton said.

The concert choir is open to all OCCC students who wish to enroll.

The chamber choir requires students to audition for membership. Auditions are held the first two days of each semester, Staton said. It is comprised of some of the elite singers of OCCC.

She said she has sung a requiem before, “but never one this hard.”

Not only is the requiem in another language, but the dead language of Latin, which isn’t anyone’s first language anymore.

Potter said for her its mostly “just memorization.”

She said she is a regular church attendee, which has given her some occasional weekly practice of singing in Latin.