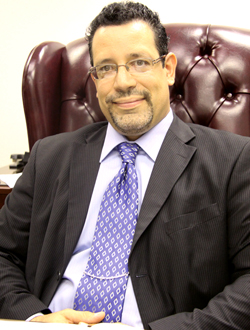 Bloomberg said the first thing on his agenda will be to get acclimated and to help the members of his division.

“As an administrator, my job is to ensure that the students receive the best educational experience possible,” Bloomberg said.

He also will supervise the directors of the Capitol Hill Center, Career Transitions Program, Community Outreach and Education, Cultural Programs, Recreation and Fitness and the extension agent of the Oklahoma Manufacturing Alliance.

Bloomberg also created the Great Scholars Lecture Series featuring nationally recognized faculty members from universities such as Harvard and Stanford, he said. Bloomberg said he plans to mimic this program at OCCC.

“No other type of educational institution has as broad a mission and touches so many lives,” Bloomberg said.

He holds a master’s degree in education from west Texas A & M as well as a bachelor’s in Business Administration from the University of La Verne, Calif., said Bloomberg.

Although Bloomberg grew up in Nebraska he is no stranger to Oklahoma.

“I’m very familiar with Oklahoma because my wife is an Oklahoma native,” Bloomberg said. “Oklahoma is a great place and one would be hard pressed to find more genuine or honest people.”

For recreation, Bloomberg enjoys automotive restoration, a hobby he has enjoyed since the age of 13. He is currently restoring a 1995 Ford Mustang SVT Cobra.