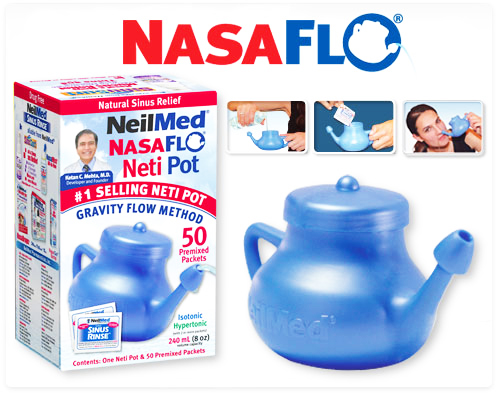 The symptoms are universal: your nostrils are clogged, your chest is heavy and it feels as if there are tiny gnomes wildly pounding hammers against your temples.

A sinus infection can cause serious mayhem — especially if you’re already balancing a hectic school schedule.

Recently, Oklahoma’s volatile weather conditions got the best of me, so I had to choose whether to be quarantined to my living quarters or do my damndest to get better — which led me to my first experience with the Neti Pot.

Since Tylenol Sinus isn’t my first choice, I opted for remedies my Mexican mother might have suggested — some hot tea to ease my throat, Vicks Vapor Rub to break up the mucus and a few Hail Mary’s to restore my spiritual health.

However, once I realized moping around wasn’t going to help much and the saints weren’t marching in on my side, I sought asylum in the aisles of the local CVS Pharmacy.

I loaded up on the largest amount of cough and sinus medicine one can legally purchase in the state of Oklahoma without looking like an assistant to Walter White.

Afterwards, I spent a week gargling cough syrup and doing my best to refrain from coughing between each heartbeat while attending work and school.

When I realized I wasn’t getting any better, I cried.

I refused to visit a doctor but I did not refuse to cry. And while it felt good to let my emotions run amuck, I was depressed to realize my tears only made the situation stickier.

Post my manic episode, a friend of mine came to my rescue and offered me some help.

He offered me a quick-fix — something that would temporarily alleviate my woes, though he made no promises for an instant full recovery.

I was hesitant at first — I’d never done anything quite like this before, I’d just heard about it in the movies.

It all sounded very strange and foreign, but at this point, I was willing to try anything.

He revealed the weapon — an odd-shaped, blue thing — and filled it with water while carefully instructing me how to position myself.

I tilted my head to the side as he emptied an arbitrary powdered substance into the object after the water filled it halfway.

I felt sweat escape my skin as my anxiety increased.

I closed my eyes before he performed the deed — it was cowardly, I’ll admit, and I just couldn’t face it head on — and soon my nostrils were filled with the strangest sensation of relief and discomfort combined.

Blinking my eyes open, I was immediately handed a napkin and told to blow.

When I pulled away, the white cloth was decorated with my multicolored mucus.

But better than my new artistic napkin piece was the oxygen flowing through my nostrils and my chest.

I’ve witnessed the power of the almighty Neti Pot firsthand.

Some might disagree with its witchcraft, but I’m definitely pro-nasal irrigation.