Netflix original gets even better 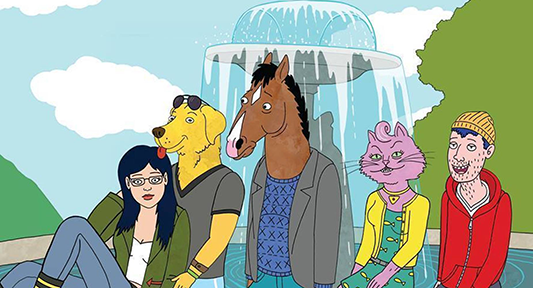 Usually my television tastes gravitate toward two types of shows: hard-hitting dramas with a great, character-driven story, such as “Breaking Bad” and “Mad Men,” and goofy sitcoms that tackle new wacky adventures each episode and work around a central theme, such as “Parks and Recreation” and “That ’70s Show.”
So what happens when you combine a good, somewhat dramatic story with timely laughs and wacky adventures? Well, that’s when you happen upon “BoJack Horseman.”
“BoJack Horseman” is a Netflix original show that is only available to watch on Netflix. After seeing a rash of great Netflix original shows get high praise across the board, like “House of Cards” and “Orange is the New Black,” I thought this show had to be worth at least trying to watch.
The show follows many aspects in the life of BoJack Horseman, a former sitcom star in the 1990s, as he tries to regain stardom with the help of his friends.
The show takes place in an anthropomorphic world, where humans and animals live mostly in harmony. BoJack is a horse, and many other important characters are animals, but some of BoJack’s closest friends are human.
Ultimately, the show is a comedy, but it also heavily follows the depressing parts of the characters’ lives. Common themes brought up in the show include BoJack’s terrible childhood, falling out with his best friend who created his show, his alcoholism, and his fall from stardom and becoming a laughingstock. And his friends aren’t without their depressing life stories either.
In fact, many moments of the show’s first two seasons are downright dark, as BoJack seeks acceptance and love, and goes to weird and disturbing lengths to find it.
The cast is filled with stars and recognizable voices, such as Will Arnett, Paul F. Tompkins, Alison Brie, Aaron Paul, and recurring or guest characters played by many famous actors and actresses.
Critics scorned the show, but its goofy adventures and meaningful story make it a big hit with audiences. And I agree with audiences. It’s a must watch.
Rating: A+