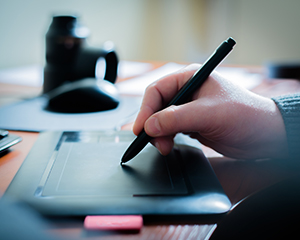 The programs will be merged and renamed the Digital Media Design department.

Anderson said the move is being made because of some of the programs being similar.

“There was a little bit of duplication of programs with what we were teaching, so it made sense to go ahead and put us together … .”

“I also had a Multimedia program over here,” he said.

Anderson said the merger will make it easier to decipher the programs.

“… We’re going to be in one spot, where we probably should have been all along,” he said.

“Whatever the program name would be, it doesn’t really matter. We probably should have been together in a group anyways.”

Anderson said that very little will change for the students.

“For students, they will still receive good training in those areas and that won’t stop. We’ll just be in one place.”

The previous Digital Media Design program offered an associate degree and a certificate of mastery.

“The animation and game design aspects will both have certificates,” he said.

“The graphic design, the photography/digital imaging option will have degrees. It will be just those four.”

Anderson said students enrolled in the new programs can expect many of the same elements as before.

“Along with that, they’ll be learning 3D studio, Macs, Flash, a little bit of After Effects and Premier.”

Anderson said opportunities will be abundant for students in the new programs, as careers in digital design-related fields grow.

“There’s a lot of jobs in graphic design,” he said.

“It could be print, it could be for mobile devices.

“… You could be a photographer … doing stuff within the photographic industry.

“… It could be animation … or it could be maybe dealing with motion graphics at news stations or for the web.

“You could be building trailers for the web — anything basically that has motion graphics or video.

Anderson said this move has not been finalized yet, but will be soon.

“It hasn’t been signed off on yet by the regents, but it should some time this semester,” he said.