Mema, Speeding Ticket, and Being Raised in a Cult 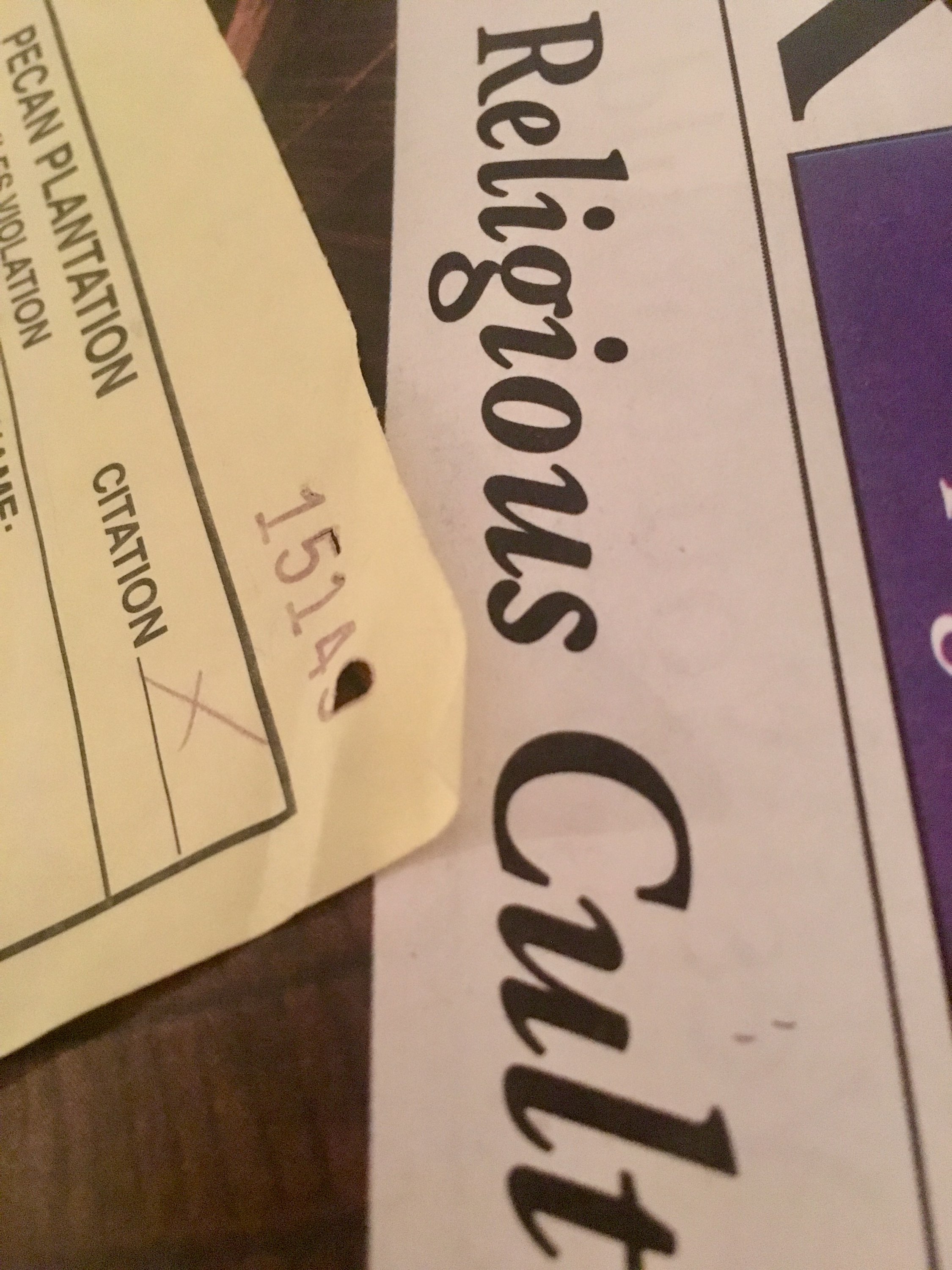 This isn’t a sob story about how I was raised in a religious cult. It’s been four years and I’m past that now. Besides, jokes on you because I already wrote about it.

No, this is a story about the time I got my first speeding ticket. Please, allow me to set the scene.

I have been driving for several years now. I have even managed to go an entire three months without renewing the tags on my license plate. That is until I cleaned out the depths of my purse and discovered an unopened letter the agency sent me. I went online and paid it the very same day. Which by the way, the late fee I had to cough up was more damaging than the 18 years I spent pondering my existence in a religious cult.

All jokes aside, not too long ago a remarkable thing happened. I got three days off work in a row. So, what did I do? I took the opportunity to drive myself down to Texas to visit friends and family before College started again.

Just as a cautionary warning, road trips by yourself can often times be damaging to one’s mental health. Let’s just say I found myself engaged in a ferocious battle of wits playing against myself like Sheldon Cooper would in the “Big Bang Theory.” The only problem, I don’t have his IQ level to justify it so really, I was just an isolated weirdo confined in the boundaries of my blueberry vehicle traveling at the speed of 80 miles per hour.  I do not care to go into further detail but consider yourself warned.

I feel it is important to mention that I do in fact have friends in Oklahoma, I just like the ones in Texas better.

Anyway, on to the important factors. 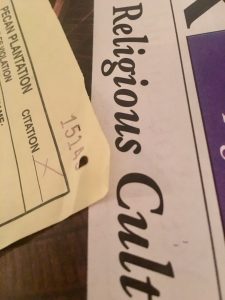 On a perfectly acceptable, face melting, Texas summer evening I drove over to my grandparents’ house, in Pecan, to drop off clothes I had bought for my cousin. I wasn’t going to be seeing him this trip, so I give them to her to give to him. Mind you, I had texted beforehand telling her I had something to drop off. No sooner had I walked through the door with my bag of clothes in hand than she sighed and announced that she was grateful I hadn’t shown up at the door with a boyfriend to present. I know you mean well Mema, but I am still alone and single. Thank you for reminding me…I’m fine, really.

As you may recall, I mentioned a cult. This is where that part comes in.

My grandparents had also once been a part of the same cult I grew up in. As it would seem normal, I spent the next several hours discussing the harmful effects religious cults possess. While this is a frequent topic amongst my family, and its discussion probably carries healing properties, I quickly lost track of time. I guess you could say I lost track of time like the cult leaders lost followers after a May camp. May camp was like Bloody Sunday but instead of flying bullets and debris, it was rebuking and shunning that caused these ankle length skirt wearing people to flee.

It was brought to my attention I needed to quickly make it back to my friends house if we were going to make it to dinner. I am very fond of food so naturally I was in a hurry to get back. As I sped down the road lost in a distracting thought about cults and food, I noticed a security vehicle rapidly approaching. Naturally I tap my brakes to slow down but as I pass security going in the opposite direction, his lights flash on and I knew I had been caught. Here’s the thing, we were going in opposite directions. By the time he stopped in the middle of the road to turn around, I could have been long gone. That was my first mistake. However, like a good citizen I pull into the Pecan Foods grocery store parking lot awaiting his arrival.

I already had my license out and ready to go by the time security approached my window. But get this, the first question out of his mouth was “Are you from here ma’am?” Clearly not! Did he not see my Oklahoma license plate as he walked up to my window? Or my Oklahoma driver’s license that he was now holding in his hand?  Whatever, I regained my composure as I thought that surely he would be understanding as I am not from Pecan Plantation. Plus, I actually waited nicely in the parking lot while he turned his car around to “pull” me over.

“I’ll be right back ma’am. I need to gather some information.” Security said. When he arrived back at my window he then proceeded to ask me who I came into Pecan to visit and then asked me to sign a slip of paper. I took the yellow piece of paper to sign but up at the top right corner I noticed a check under the box marked “citation” instead of “warning.”

“Wait, is this a speeding ticket?” I asked.

“Yes, Ma’am. I caught you going 42 in a 35.” Security said in a very thick southern accent. “As it reads if you don’t know what the speed limit is then you should go 25.”

Okay, here is problem number one, how the heck am I supposed to “know how it reads?” If I didn’t see the speed limit sign in the first place, what makes you think I know about the other little regulations you have?

I would like to say that I remained calm and did not squeal my tires as I drove off, but that would be lying.

I was boiling up inside. I had never been so angry or irritated in my entire life! I had to pay eighty dollars for a “ticket” that I got in a gated community and it wasn’t even going on my record. It wasn’t even a real ticket!

I managed to keep my feelings at bay while out to dinner with family. I could feel the anger bubbling up inside, but I was determined not to ruin my last evening in Texas with family.

Then, I made the mistake of ordering a suspiciously strong coconut margarita. To be fair I was raised in a cult where anything to do with alcohol was forbidden, therefore I have little to zero alcohol tolerance. This is how I know I should not have mixed blinding anger with alcohol intoxication. During the course of the meal I slowly felt the tequila warming my insides. I concentrated on my fried shrimp and made an effort not to laugh out loud at the guitarist playing in the restaurant. He was taking requests from the diners. Every time a couple would request a song he would smile, like he knew what they were talking about, then proceed to play a completely different song.

I don’t remember much of the conversation we had at the dinner table. I remember explaining to my uncle what I do for work but got interrupted by a brutal song request bellowed out from a lady across the room. The guitarist of course played a different song.

I do remember the car ride home after dinner. I was laying in the back seat of my aunt’s car and my best friend was in the front. We had stopped at a Walmart for something but only my aunt went inside.

It didn’t take long for the tears to come. Before my friend had any warning, I had fallen in the back seat slumped over, taking up the entire area, and bawling my eyes out. I would later learn that Pecan security received the heavier portion of my sobbing alcohol induced threats. More specifically the security officer that pulled me over. Apparently on the car ride home I sprouted very graphic profanity no mother would be proud to hear.

The next morning, I marched myself down to the security office fully prepared to give them a piece of my mind. Only to learn the receptionist could do absolutely nothing regarding my situation. I am not exactly proud to admit that as I spoke to the receptions, I forced myself to speak as if I had a lump in my throat and was ready to cry any second. This got me exactly nowhere except an invitation to write a letter to the Pecan Plantation Safety and Security Committee. This was the only hope I had of getting out of my speeding ticket. So, I did it. I wrote to the committee, which by the way is formed of residences of Pecan so that’s not even a real committee.

There you have it. This is how I got my first speeding ticket by being late to dinner because my Mema and I were talking about cults.