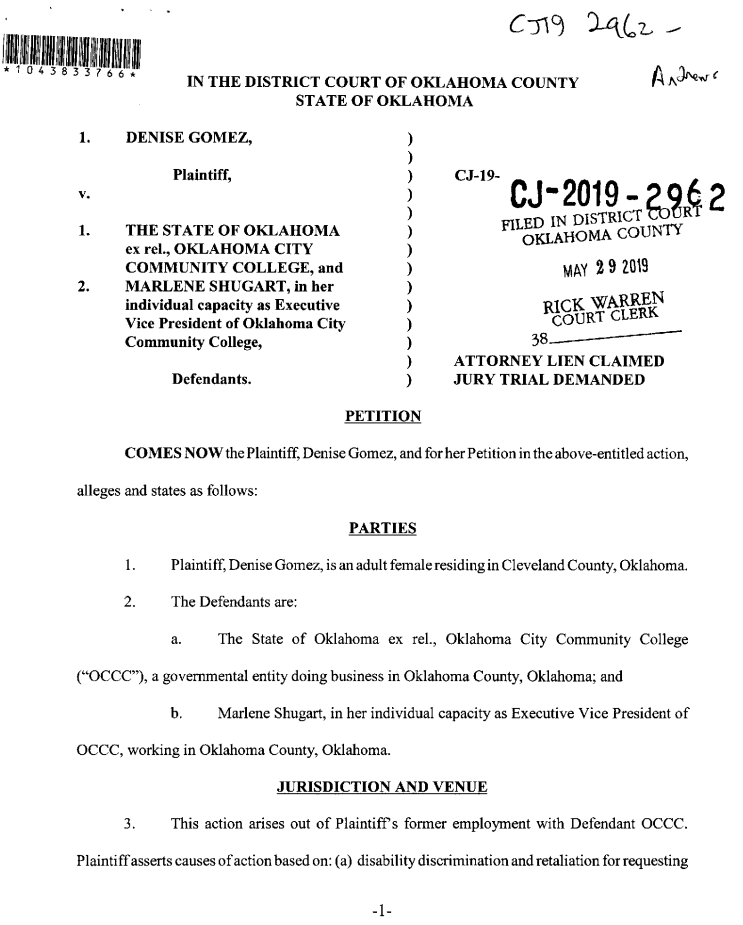 A former longtime Oklahoma City Community College employee and Employee of the Year, is suing the college in federal court for wrongful termination.

Denise Gomez, who worked at OCCC for more than two decades, claims she was fired for taking time off to attend a disability-related medical appointment.

She filed her wrongful termination civil suit against OCCC and the college’s executive vice president in Oklahoma County district court in June. It was moved last week by college petition to the United States District Court for the Western District of Oklahoma.

Gomez is asking for a jury trial.

She was fired June 13, 2018, a day after attending a medical appointment for her liver condition, which she said is serious, according to court documents. She is seeking financial compensation for lost wages and emotional stress.

Gomez’s suit alleges age and disability discrimination, and violations of the Americans with Disabilities Act, Family and Medical Leave Act, the Equal Protection clause of the 14th Amendment, the Oklahoma Discrimination in Employment Act, and the Rehabilitation Act, according to court records.

The suit names OCCC Executive Vice President Marlene Landini (formerly Shugart) specifically, in her role as Gomez’s direct supervisor.  At the time of her firing, Landini was Chief of Staff of the President’s Office; Gomez was her administrative assistant.

In July 2018, Landini was moved to the position of Executive Vice President replacing Steven Bloomberg who served in that capacity since 2015.

President Jerry Steward said the college couldn’t comment on pending litigation. Requests for comment from Landini, Gomez, and each party’s legal team were not returned as of press-time.

In request for dismissal filings, the college states Landini claimed “poor work performance” as the reason she fired Gomez.

In court documents obtained by the Pioneer, OCCC claims Gomez’s coworkers said her work performance was poor, and that she only requested a short time off to go to a liver specialist and was granted sick leave for it.

The college further alleges Gomez never mentioned her disability or its severity to OCCC or her supervisors.   They also said Gomez was an at-will employee, meaning she could have been fired for any reason–or none at all.

However, according to Gomez’s suit, she was never disciplined or otherwise told her job performance was unsatisfactory. She had only worked in the President’s Office for nine workdays before she was fired.

Shortly before beginning her position May 30, 2018, Gomez notified Landini she suffered from a liver condition and needed time off for an upcoming appointment with a specialist, according to court documents.

The next day, Landini fired Gomez. According to court filings, Gomez had been an employee of OCCC for 22 years prior to her termination. She was once named Employee of the Year.