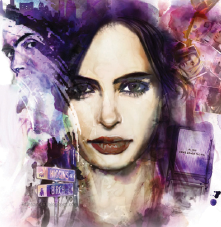 What can I say about “Jessica Jones,” The Netflix TV series based on the Marvel Comics character of the same name? The show is unusual for a show based on a Marvel property.

The beginning borrows heavily from noir crime stories, and although Jones has superpowers, she is not a cape-wearing hero with a secret identity. She did try the superhero thing once, but that was part of the messy complicated past that Jones left behind to lay low and become a private investigator.

Krysten Ritter, who many viewers will recognize from “Breaking Bad,” plays Jones with the right combination of street tough demeanor and vulnerability. At first it feels like Jones is deliberately living out a hard-boiled detective fantasy and it is hard to believe she drinks so much, but it is easier to understand when you consider the traumatic things she went through at the hands of the show’s central villain, Killgrave, played by David Tennant.

Killgrave is the creepiest super villain on television with no conscience and the ability to exert absolute control over his victims with a few words. Other villains are scary because they kill people. Killgrave puts victims in a living hell, forcing them to commit terrible acts, and then live with the memories. Often they can’t even tell anyone because what happens is so unbelievable.

Casting may be the shows greatest strength. In a addition to Ritter and Tennant the show includes Mike Colter, who looks like he was born to play Luke Cage, a Marvel hero whose story intersects with that of Jones.

Rachel Taylor and Wil Traval are both well cast as “Trish” Walker, and Will Simpson.

The most interesting casting decision is the choice of Carrie-Anne Moss as the powerful lawyer, Jeri Hogarth, a character originally portrayed as male.

It’s a choice that makes clear the show is speaking to a modern audience, and Moss plays the calculating and ruthless character with complete conviction.

This show is worth the time of anyone who enjoys comic books, and can still be appreciated by those who have never picked one up.