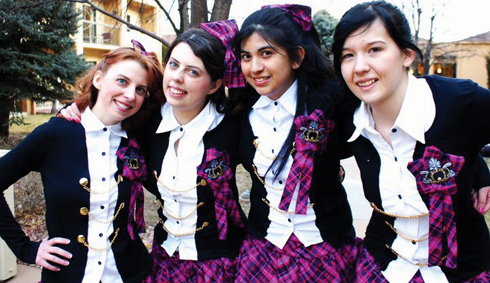 Melissa Shows is the leader of an all-American Japanese pop girl group that has appeared at conventions around the country. The group, Happy! Project, has even appeared in FLASH magazine, a publication about Japanese pop culture.

Shows, 23, currently attends OCCC, with the goal of earning a degree in music management. She and fellow OCCC student Tara Muchmore are the only two who live in Oklahoma.The newest members of the group, Kristy Valdez, 24, and Morgan Davis, 18, live in Texas.

Shows said all four of them were fans of J-pop music and began the Happy! Project in 2006 with the idea of locating other Japanese pop music fans in America.

“Happy! Project strives to be the first well known Japanese pop group in America and to eventually perform in Japan,” Shows said.

The Happy! Project covers newly released Japanese songs that are catchy to the ear and that American music fans can relate to.

“Japanese music has more of an ‘80s pop feel and American music is more electronic and hip-hoppy, so we try to find the middle ground,” Shows said. The Happy! Project girls personally choreograph their dance moves to popular J-pop music as they cover popular Japanese pop songs.

Muchmore said the Los Angeles expo was an important milestone for the group.

“Attending Animé Expo and being in FLASH was really an exciting moment for us as a group because we have come so far,” Muchmore said.

Happy! Project headlined their first concert at Animéland Wasabi in Denver at the start of 2010 and will be performing at Comicpalooza in Houston from May 27 to 29 with autograph signing and a concert showcasing their talent.

“We perform mostly at animé and sci-fi festivals where audiences are familiar with our music,” Shows said.

Muchmore said the group has overcome the biggest obstacle: being taken seriously.

“But the Happy! Project takes too much time and money to be a hobby,” she said. “It’s something we truly enjoy.”

Shows said new members of the group have to adjust to the demanding time commitment.

“We easily work 35 hours each week on choreography and singing, on top of costume designing and solo work,” Shows said.

“The Happy! Project continues to search for talented and charming girls with natural dance and singing skills that are passionate about Japanese pop music,” Shows said. “We’re interested in meeting talented singers and dancers that are interested in Japanese music and are willing to do the long hours.”