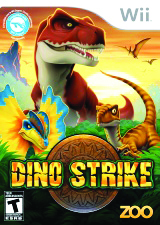 “Dino Strike” is an arcade-style shooter where you the player investigates the disappearance of a research team that was investigating a volcanic island where dinosaurs thrive.

In this game there are unfriendly dinosaurs, including raptors and one very angry T-Rex.

Everything is out to eat you, so gamers need to watch their ammo and keep a sharp eye out for anything cold-blooded.

The game play is all right as far as a rail shooter goes.

Sometimes you don’t get enough time to collect all of the power-ups you would like, but that is more reliant on the skill of the player.

This game is one to four players, but the most fun comes from playing with one or two people, as you and your friend can dual wield Wiimotes, using different weapons in each hand.

Both hands have separate ammo pools, which makes for a very interesting experience for a first-person shooter game.

Unfortunately, the time it takes to beat the game is very short, being that there are only five or six stages, but the game gets much more challenging toward the end.

The controls are superb, requiring only that you change weapons, reload, and shoot.

Unfortunately, it gets a bit confusing when you are using a Wiimote in each hand.

The graphics are very detailed. I was very impressed with how nice the dinosaurs trying to eat my face looked.

At $19.99, “Dino Strike” might be worth your money if you like the genre, however, I suggest renting it.

The experience is short, but the game is pretty good.