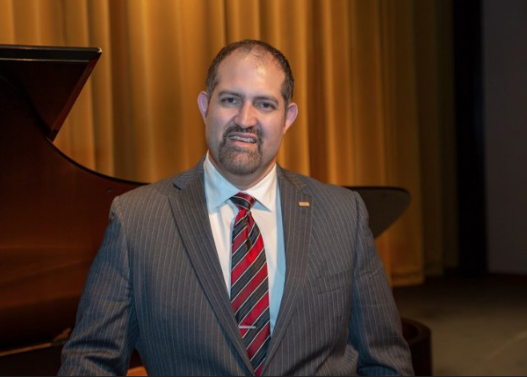 It seems as though everyone always has a sense of cynicism, that everyone looks around and values what they get and how it helps them. Drivers value infrastructure and the workers that maintain it, patients appreciate their medical professionals, and nearly everyone wants the products that professions like plumbers work to maintain. Demand forces priority to areas of survival versus areas of truly living.

For one person, living cannot happen without the arts. The arts are just as essential as anything else.

Lemuel Bardeguez, director of Cultural Affairs at OCCC, saw that spartan effect in the arts firsthand after COVID-19 surged and the entire artistic industry was classified as nonessential. But, he decided that he wasn’t going to accept that bleak outlook.

Standing at over six feet tall with short hair and a well-maintained goatee in his Visual and Performing Arts Center office, Bardeguez assures that he sees the future of the arts as anything but bleak.

Wearing a blue collared shirt with black dress pants and a nice watch on his left wrist, Bardeguez scans his office with a sense of confidence and authority. Displayed around the room are colorful and vibrant memorabilia from past projects, paintings, small statues, and some pottery.

Bardeguez gazes out of his window while he thinks for a brief moment before saying how the arts are not dead and they are not small. Rather, they are much more than they appear to be and permeate all facets of life.

Sitting he notes, “The arts oftentimes are more; they are able to give a voice to a part of the human experience that can’t be put into words. So, they educate…they allow us to have a glimpse into different cultures, different styles, different perspectives. They allow an opportunity to emote.”

He says that he decided that people needed a way to not just survive through the pandemic but live during it.

One such way was to engage with performance art.

Those who know him, know that he has been focused on providing artistic viewing options for years.

“[Bardeguez] has constantly been at the helm of making sure that diverse and accessible programming is provided, whether it is individuals in Oklahoma City, across the state, or at Oklahoma City Community College,” Amber Sharples, executive director at the Oklahoma Arts Council, says.

In 2020, Bardeguez knew that there was a scarcity of artistic entertainment because all venues were closed in Oklahoma City and across the metro. So how could arts continue to be a part of people’s lives when no one could even escape their homes to catch a show?

He decided to diverge from the standard format of live in-person theater shows, and streamed performances online directly into people’s homes. Those performances could help those who wanted or even needed something to help them feel better and to feel like they were in a more normal time.

With generous sponsors, he was able to hire local artists that were no longer able to make a living because of the situation and connect them through the Internet, directly to the people who needed a return to the much-needed arts. And so he, with the help of others, made the first ever virtual concert series at OCCC.

One reason Bardeguez was so passionate to keep arts alive and considered essential in OKC is because the arts were always present in his life.

“I have known Lemuel for nearly 15 years and in the entire time that I have known him, he has always demonstrated a passion for arts access for Oklahomans, for his respective community that has been working with and living within,” Sharples says.

All throughout his life, Bardeguez has connected with the arts.

Bardeguez grew up in Puerto Rico where he was inundated with the arts. Some examples are his grandfather singing him arias (a solo from an opera), to private music lessons, or even being able to learn folk dance and song directly from a group that came in from Russia.

For Bardeguez, life was always filled with art.

Smiling and almost chuckling he says, “I grew up so immersed in a culture for which music and dance are so important that they are sort of in the DNA.”

Later, he came to Oklahoma and found himself teaching at OSU as an adjunct while working in other involved professions such as private music instruction, working in a music store, and director of band in Bethel, Okla.

Bouncing his foot over his knee, he coughs and emphasizes the word “it” as he recalls his students.

In his current position his workday is still enveloped in artistic expression.