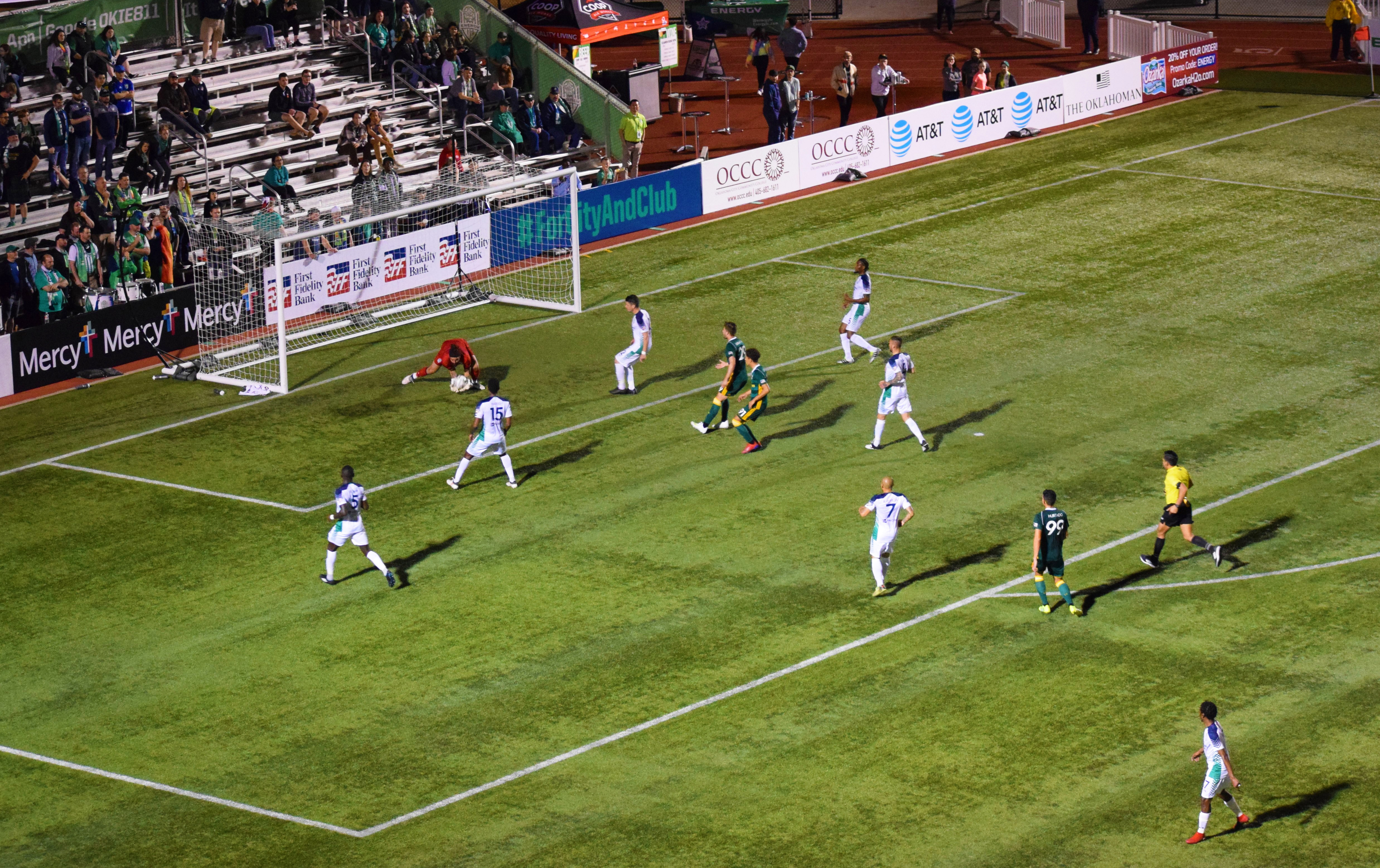 Despite missing four regular starters serving international duty at the Gold Cup, Oklahoma City started out strong in opening 15 minutes. The Energy midfield held its own, resulting in a back-and-forth game where both sides had chances.

Unfortunately, OKC learned the same lesson Phoenix’s previous six opponents have been taught: Phoenix is determined to finish the job and win the USL title this season.

“I think we were beaten by the better team, simple as that,” Energy Coach Steve Cooke said after the match. “They’re the best team in the league, there’s no doubt in my mind about that.”

Handling the Energy, Phoenix has extended its club record winning streak to seven games, outscoring their opposition 26-4 during the streak.

The Energy, unable to convert on their strong start, hampered themselves with an own goal to open the scoring.

Phoenix forward Solomon Asante dipped his shoulder, turning the Energy defender and surging into the box. Asante played a dangerous ball toward teammate Adam Jahn at the back post. Energy defender Christian Ibeagha slid and successfully deflected the shot… directly into his own net.

Phoenix, specifically Asante, did not relent. He added second goal two minutes later, this time assuring it would be his own name listed on the scoresheet.

“Solomon Asante, for me, is the best player in the league,” Cooke said. “He is an absolute game changer.”

“There is no doubt in my mind he can play in any league in the world and do well.”

Half an hour into the game, the Energy found new life.

The referee awarded a penalty to Oklahoma City after he deemed Rising defender Joe Farrell handled the ball in the box. Rafa Garcia buried the penalty kick, but more importantly, Farrell was a yellow card for the foul. Since it was Farrell’s second caution of the match, he was dismissed, giving the Energy a man advantage for the final hour of the match.

Phoenix showed their class after the dismissal of Farrell.

A fan tuning into the game after the red card might never have known Phoenix was dealing with a disadvantage. They continued to pressure the Energy, playing fluid attacking soccer, buoyed by a dazzling display from Asante.

Asante added another goal in the 80th minute, paired with a free kick goal by Jon Bakero, finishing Phoenix’s 4-1 victory.

“On a night like tonight, [Asante] is a pain in the backside. He was great around the edge of the penalty area,” Cooke said.

Oklahoma City won’t see the defeat as a total loss. The one sided scoreline will hurt, but the Energy weren’t three goals worse than Phoenix in the middle of the pitch. The difference has been what has haunted OKC all season long.

Kyle Hyland made his 100th appearance for Energy FC Saturday night. He is the first Energy player to reach the landmark in club history. Photo Courtesy of OKC Energy FC.

“We’ve got to take what we can from this. We know where we want to be,” Energy defender Kyle Hyland said.

“We want to be as good as them if not better come playoff time. It’s a measure at the halfway point in the season so we have a lot of work to do.”

Oklahoma City simply has not been good enough in the final third of the field.

The Energy have consistently failed to find the quality and finish off attacking moves. Either the offense has been unable to play in a final ball to set up forwards, or the forwards have been unable to convert their one-on-one opportunities with the goalkeeper.

The biggest difference between the sides can easily be seen in the goal tallies.

Phoenix on the other hand, has three players with eight or more goals (Asante with 10, Jahn with 9, and Junior Flemmings with 8).

“We’ve got to find that little bit better quality with the ball around the edge of the box,” Cooke said.

For Oklahoma City to make the jump from playoff team to true Western Conference contender, they will have to find a way to convert more chances into goals.

If the Energy cannot be more lethal in the final third, they will fall by the wayside in the playoffs.

The Energy will return to action next Saturday as they head to Nevada to take on the Las Vegas Lights, a side they defeated 2-1 in their home opener in March.