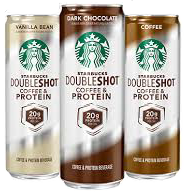 Recently, I got a coupon for a free sample of a new canned drink from Starbucks, called Doubleshot, a protein coffee.

I am a huge fan of Starbucks because I love its delicious drinks. However, the name of this new coffee totally discouraged me.

The name makes me think of some sort of functional food that I would likely never eat.

I am very picky about what I eat and drink, and am used to considering foods and drink as being totally separate things. This drink’s name made me feel like it would taste like a mix of coffee and food.

Because of that, I tossed the can in the fridge without a second thought.

A few days passed until one morning when I was out of milk for the cereal I usually eat for breakfast.

Then, I found that sample again. After a few minutes of hesitation, I decided to give it a try.

I was thinking that I would take just one sip and if it tasted awful, I’d throw it in the trash immediately.

Several sips later, I found I could not stop drinking it until the last drop was gone.

It tastes really delicious and tasty.

The flavor I tried is dark chocolate which is like a mix between light chocolate, syrup, and milk with a unique smell of protein that was more than bearable.

After that, I immediately looked for the flyer that had been attached to the sample and found out that Starbucks is running a contest with a $500 gift card as the prize.

The contest centers on telling Starbucks your thoughts and feelings about the Doubleshot Protein coffee. All you have to do is to try the sample and then, go to www.doubleshotsample.com and write your review.Who knows? Maybe $500 worth of this tasty beverage is in my future.