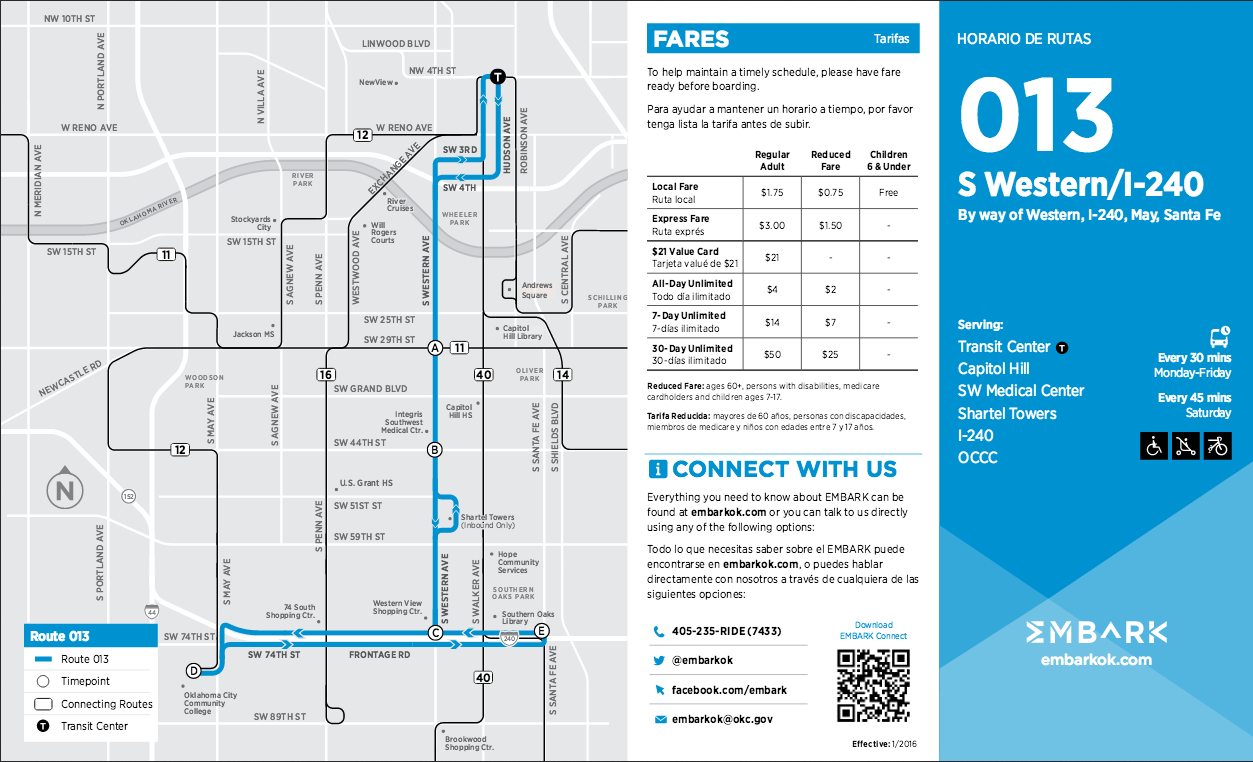 Night students will now have the option to take a bus home.

Beginning Jan. 25 an Embark bus will run to and from the college until midnight.

Embark Spokesman Michael Scrotgins said that the company is adding the new routes to a night service that was introduced in January 2015 that included routes N23 and 11.

He said the evening service has been very popular, which is why Embark decided to add more routes.

Route 13N will reach OCCC every hour, and “pulse,” or converge with all four other of the night busses, every hour at the Downtown Oklahoma City Embark Transit Center located at 420 NW 5 Street., said Scrotgins.

For OCCC’s northside residents, the extended hours of route five means that they will be able to take the 13N, connect at the Transit Center, and take rote five as far north as Mercy Hospital, located at west Memorial Road and north Meridian Avenue.

Students, faculty, and staff can buy discounted Embark passes at the OCCC Bookstore. The pass is $30 and valid for 30 days.

English Professor Stephen Morrow uses his pass to be environmentally conscious and ride the bus everyday.

“I really worry about climate change,” said Morrow, “I want my children and their children to be Oklahomans, so I try to drive as little as possible.”

He tries to watch his carbon footprint as much as possible, though he said is aware that his effort is very small.

“I know that the carbon atoms I keep out of the atmosphere are not going to tip climate change one way or the other,” Morrow said.

“If I know I am not going to make a practical change in the atmosphere, why do I do it? Because at least I can be a conscious person living the best life I can,” Morrow said.

The Environmental Protection Agency might disagree with Morrow that a small change can be effective. They estimate that a typical passenger vehicle emits, on average, 4.7 metric tons of carbon dioxide every year. Additionally, cars can emit other greenhouse gasses as well. Methane, nitrous oxide and emissions from leaking air conditioners are less frequent, though have a higher global warming potential, according to an EPA report.

Nevertheless, Morrow said that since he started riding the bus nearly seven years ago things have been falling into place in his life.

Morrow rides his bike to and from the transit center everyday. He said adding a healthy commute to his routine feels great.

Morrow also said he takes the opportunity of downtime on the bus to read.

“I’ve probably added at least 30 titles to my annual reading by taking the bus,” he said.

Most of all, Morrow has fallen in love with not having to drive.

“I just enjoy it, I like being chauffeured. I don’t wanna get on the highway at 7 a.m. and put up with all the pick up truck drivers,” he said.

All Embark busses are equipped with wi-fi, a necessity for any student, said Scrotgins.

“That’ll be a good tool for them to continue some of their study, go ahead and do some homework, and get it done before they get home,” he said.