Changes to come: OCCC President set to retire in ’21 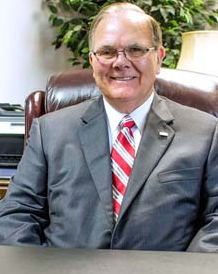 The OCCC Board of Regents unanimously accepted his retirement letter Sept. 21 at the regular board meeting

During his five years as president, Steward helped to accomplish many things for OCCC, Steward said.

He established a student success advising model that provides “wraparound services” for students.

He oversaw the completion of the OCCC Capitol Hill Center.  And, he helped provide employee income increases, he said.

“Our accomplishments are our together,” Steward said in an OCCC community email.

He said he has deeply contemplated the fragility of time and has decided to use his time in retirement to spend with his family because the time will not be available forever.

In preparation for his retirement, Steward has released control of his day-to-day operations of the college to Provost Jeremy Thomas, according to an email sent by Devery Youngblood, chairman of the OCCC Board of Regents.

“Thomas will be a part of a dynamic leadership team, along with Executive Vice President Greg Gardner, and Chief of Staff Danita Rose,” Youngblood said.

In the leadership arrangement, Thomas, who has been at OCCC for about two years is responsible for overseeing  Academic and Student Affairs, and Communications (Marketing/PR). He was appointed to the Provost position by Steward this year.

Gardner is responsible for overseeing operations including IITS, legal/contracting/purchasing, facilities, security, and finances (CFO/Bursar’s Office). He was appointed to Vice President of Academic Affairs in 2017 by Steward. He was appointed to this position in 2020.

Danita Rose, who has been at OCCC for just over a year, is now responsible for overseeing Human Resources, Foundation, and Enterprise Services (cafeteria, coffee shop, bookstore, etc.) She formerly served as Executive Director of Enterprise Services and was appointed to this position in 2020.

Rose said she wants to thank Steward for stepping back and helping OCCC to make this a year of transition and change.

She understands that anytime there is change in leadership, there is bound to be mixed emotions.

“Chapters end and new chapters begin, and we’re in one of those times right now,” she said

“Our campus needs repairs; our culture needs to change, our technology needs to update, and our brand has to move forward,” Rose said.

She is excited about the potential for positive impact on employees and students.

She said she knows that is a big promise, but it is one that she feels confident that OCCC can fulfill.