‘Book of Basketball’ full of laughs 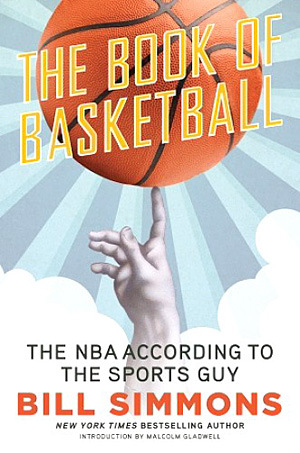 I would be lying if I categorized myself as a book reader but recently I finished a book that I still cannot get off my mind. Bill Simmons’s “Book of Basketball” is a great read that combines comedy, blatant bias and witty basketball IQ. Simmons is a huge Boston Celtics fan and he is not ashamed to add that to his writings. In the book, he frequently drools over Larry Bird and his legendary career.

I am not the biggest Simmons fan because he is a comedy-based sports writer. He used to write for the Jimmy Kimmel Show and it is apparent in his work. However, I must say some of Simmons references will have you bent over in laughter.

This book is an NBA connoisseur’s dream. Simmons breaks down the hierarchy of the NBA Hall of Fame in great detail. Simmons also breaks down the most coveted “What if?” questions most dedicated NBA fans have tried to answer all their lives. “What if Michael Jordan never played for the Wizards?” “What if Kobe was convicted of sexaul assualt?” “What if Memphis landed LeBron instead of Cleveland?” Simmons goes on and on, breaking down key monumental moments that never happened but would have been interesting to see.

Simmons also breaks down the Most Valuable Player voting process, how biased it is and how we could make the decision for MVP much easier.

He provides great questions people should ask themselves while voting. “If you replaced each MVP candidate with a decent player at his position for the entire season, what would be the hypothetical effect on his team’s record,” Simmons said. “Ten years from now, who will be the first player from that season who pops into my head?”

Simmons’ great appreciation for the history of the NBA is refreshing in this “what have you done for me lately” society. Simmons’ immense effort and passion for the game pours out of this book. You can tell he really took his time and did his proper research for this project which I can truly respect being a journalist myself.