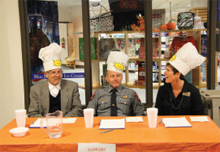 Talk of delicious soup and sweet confections filled the air of OCCC Nov. 3 as the Faculty Association hosted a soup and bake sale to raise money for student scholarships.

As with previous Faculty Association sales, the bowls were judged on various points by several people.

Fitzpatrick said he liked soup number four the best, which was the 15-bean soup with ham made by Curriculum and Assessment Director Catherine Kinyon.

The sale was received well by participants, and received positive reviews.

“They do it every semester, and it all goes to support student scholarships.”

The sale raised $417.37, for the Faculty Association’s student scholarships.

Carlisle said the professors and students filled out forms, and the committee goes through and awards scholarships based on those applications.

“Sometimes everybody who applies gets a scholarship, but it depends on how many applied, and how much money we have,” he said.

The winner of the soup contest was a tie, so both winners received a $15 Panera Bread Gift card.

The winners of the soup contest were:

Soup #8—15 Bean Soup with Ham by Catherine Kinyon and

Tied for third were:

Soup #6—“Dinner in a Flash” Soup by Fabiola Janiak-Spens