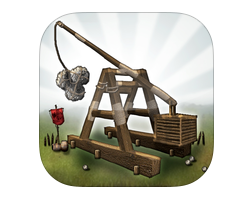 Smartphone games these days are all about cuteness. I suppose they always have been since the dawn of time — at least since 2007 when the modern smartphone emerged.

If money makes the world go ’round, cuteness makes money go ’round.

If you don’t believe me, look at the Nintendo Wii. Its competitors in the gaming market at the time were the Playstation 3 and the Xbox 360. The Nintendo Wii crushed them in sales.

This happened because the Wii was the cutest console to ever hit the market. Adorable plumbers and hedgehogs were formidable foes for Sony’s and Microsoft’s superior graphics. 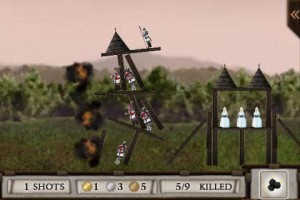 Naturally, the market is saturated with cute. Because of this, it is refreshing to have a gory little app called “Crush the Castle.”

“Crush the Castle” can simply be described as “Angry Birds” without the cute.

Using a trebuchet, you swing huge rocks and bombs across the screen at the castle on the other side.

Like “Angry Birds,” it’s a matter of strategically aiming the shots to cause the most structural damage. A major difference, though, is that the player doesn’t get to specifically aim the launcher where he or she wants it to go. It’s one tap to make the trebuchet start the throw, and another tap to release the devastation.

This makes for sweet victories and hilarious failures.

Most importantly, though, it isn’t adorable. It’s not candy or fat birds.

It’s rust and iron and fire and blood.

The little kings and guards and queens get squashed and bloodied with a scream of anguish.

They look a bit like Terry Gilliam’s cartoons in “Monty Python and the Holy Grail,” so this app may cause you to immediately watch that movie.

“Crush the Castle” is 99 cents at the Apple Store and, if you act fast, you can get “Holy Grail” on Amazon for under $5.