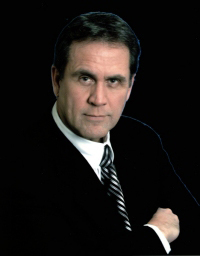 NASA flight controller J.C. Elliott related some of his experiences as a leader on the ground crew during the Apollo 13 mission in 1970.

He helped guide the astronauts back to Earth with only minutes remaining of their oxygen supply after a catastrophic fire on board the spacecraft.

“I want to talk about what we learned from Apollo 13 that you can apply to your lives today,” Elliott said in a speech on campus April 12. “It is about leadership, it is about challenge, it is about making choices, and it is about realizing that failure is not an option.”

Elliott’s colorful personality came alive during his presentation. The first American Indian to earn a degree in physics from the University of Oklahoma, he was dressed in cowboy boots and wide-brimmed hat. His western shirt was embroidered with eagles in flight.

His message to students is that they control their own destiny and it is possible to be whoever they want to become in today’s world.

He also talked about the drama of the Apollo 13 rescue. He said it was like “threading a needle from 70 feet away.”

The NASA ground crew didn’t know the outcome when the space capsule splashed down.

“When the astronauts landed, we didn’t know if they were alive,” Elliott said. “They were a little slow calling out.”

He told OCCC students that Apollo 13 was a success because they never gave up.

In his life, Elliott said, he has held several different jobs like road construction worker, actor, and NASA flight controller. Now retired from NASA, he is currently a country music artist.

After catching the attention of the students with his words of inspiration, Elliott talked about his childhood in Oklahoma City and how he began his NASA career.

He called himself “the biggest nerd in school.” He graduated from Northwest Classen High School.

In 1966 while in the master’s program in physics, he was accepted for a job at NASA after being interviewed with 69 others on the college campus.

“Landing men on the moon was always my original dream,” Elliott said. “That’s what I was called to do in this life.”

Thirty days after being accepted, Elliott packed his things, left OU, and moved to Houston to begin his career at NASA.

Elliott’s stories of his life and his many careers made an impression on the audience.

“His speech made me think,” student Erica Collins said. “It really makes you think about the possibilities that life offers us.”